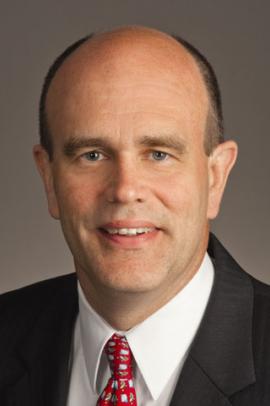 Michael R. Gibbons is a lawyer and partner in the firm of Gibbons Workman in Jefferson City. The practice is focused on lobbying and government relations in Missouri. A lifelong resident of Kirkwood, Gibbons was elected to the city council in 1986 and 1990 and was deputy mayor from 1990 to 1992. He served in the Missouri House of Representatives from 1993 through 2000, holding various leadership positions. Gibbons was in the Missouri Senate from 2001 through 2008, again serving in leadership, ultimately as president pro tem from 2005 to 2008. Gibbons is a director on the board of the YMCA of Greater St. Louis, a member of the Kirkwood-Des Peres Area Chamber of Commerce, and a member of the Kirkwood Kiwanis Club. He has served on the Society board of trustees since 2007.