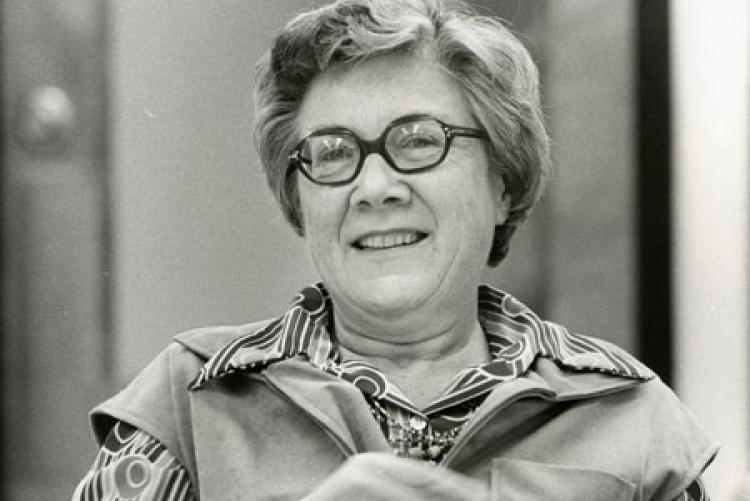 In 1987, after Marjorie Paxson donated $50,000 and her personal papers, plus a $13,000 contribution from the Gannett Company, the National Women and Media Collection was established at the University of Missouri’s Western Historical Manuscript Collection-Columbia, which is now administered by the State Historical Society of Missouri.” [Paxson, Marjorie B. (1923- ), Papers, 1844-2008, (C4078)] 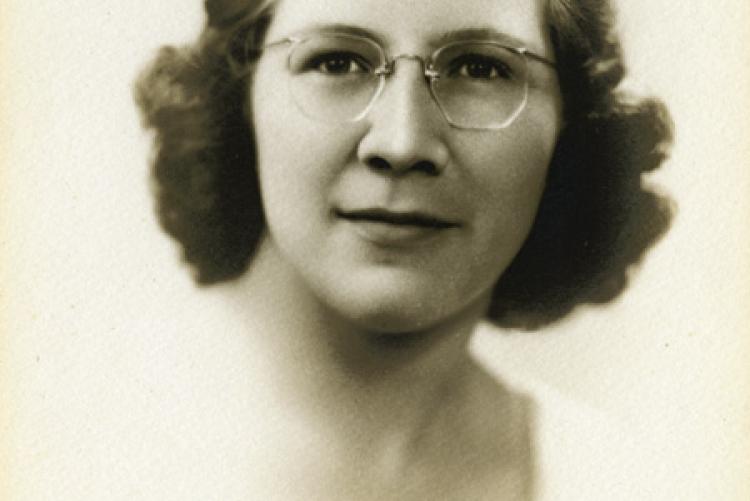 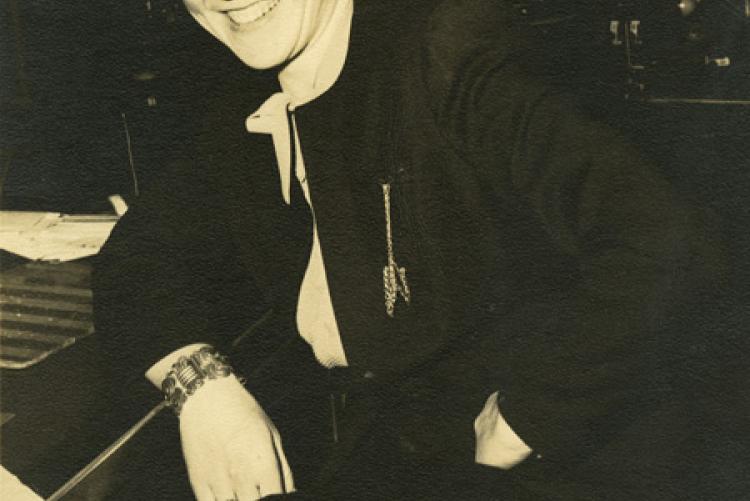 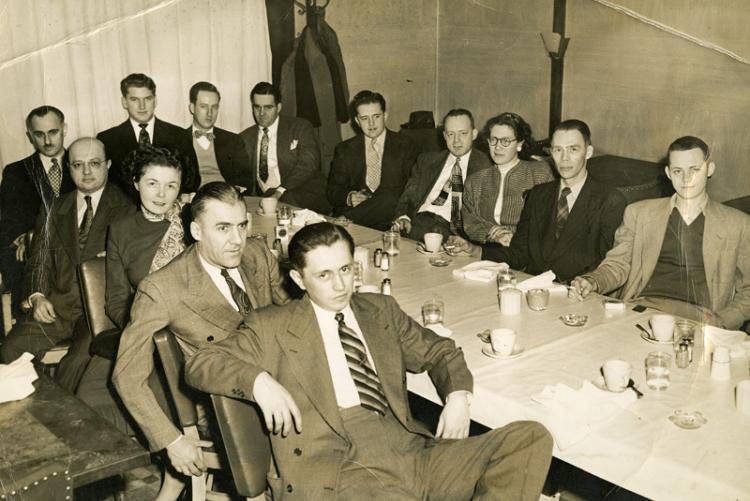 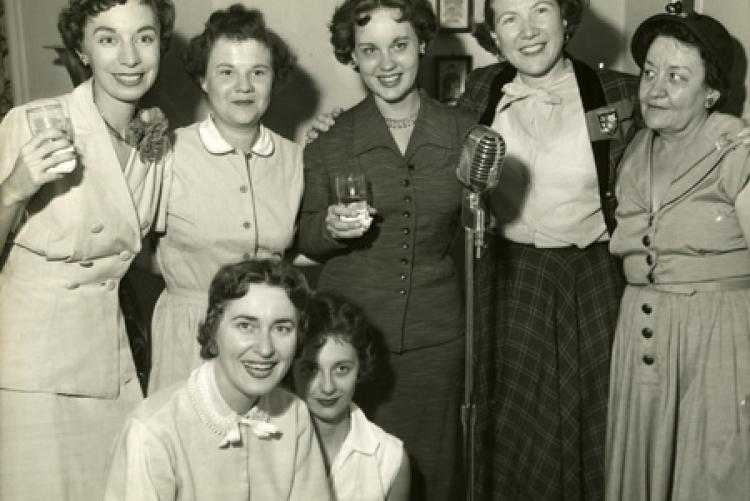 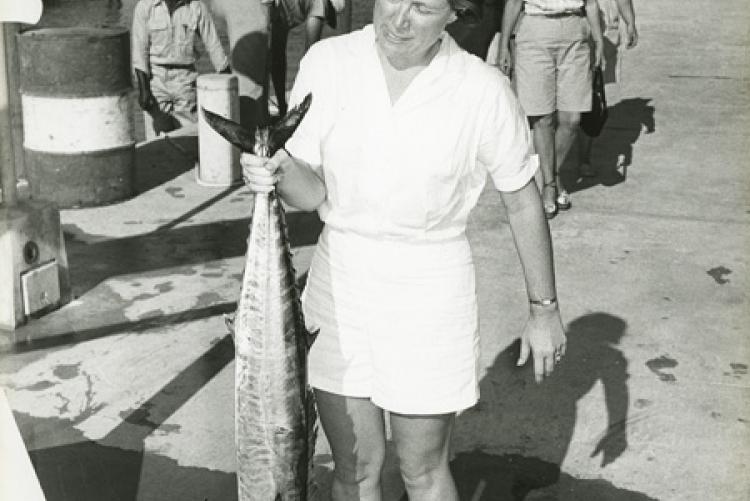 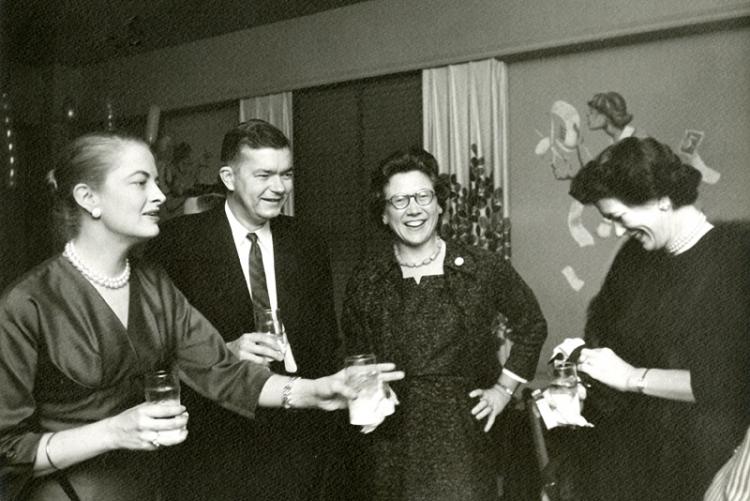 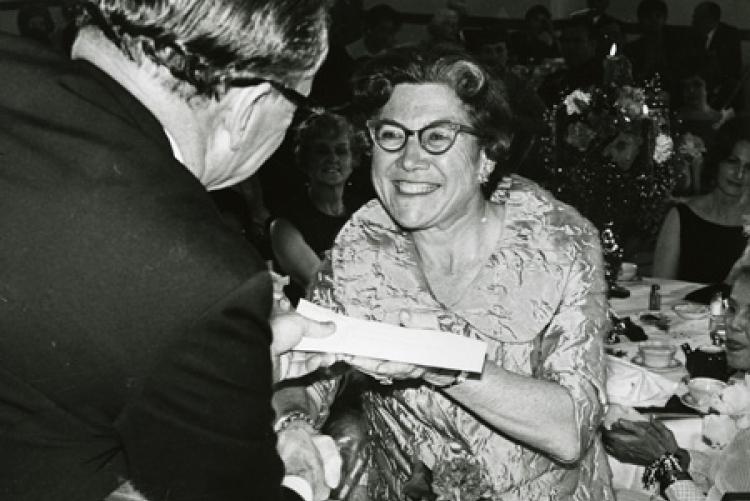 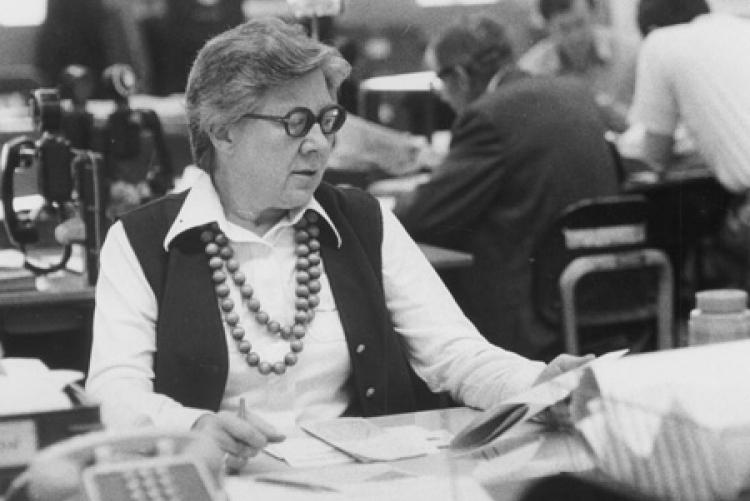 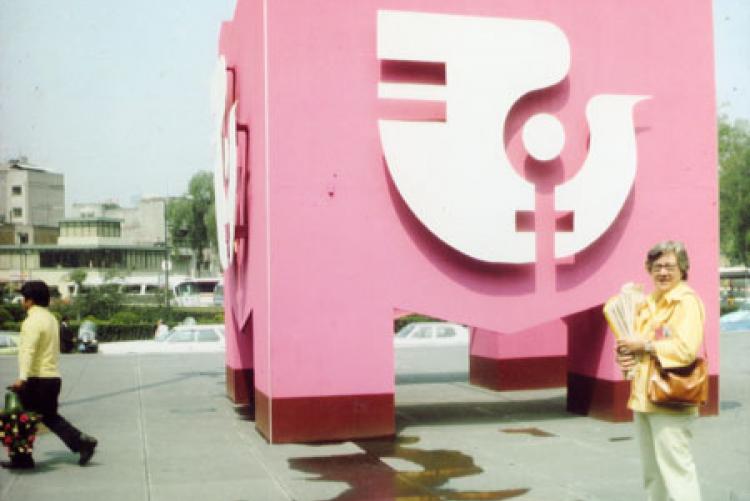 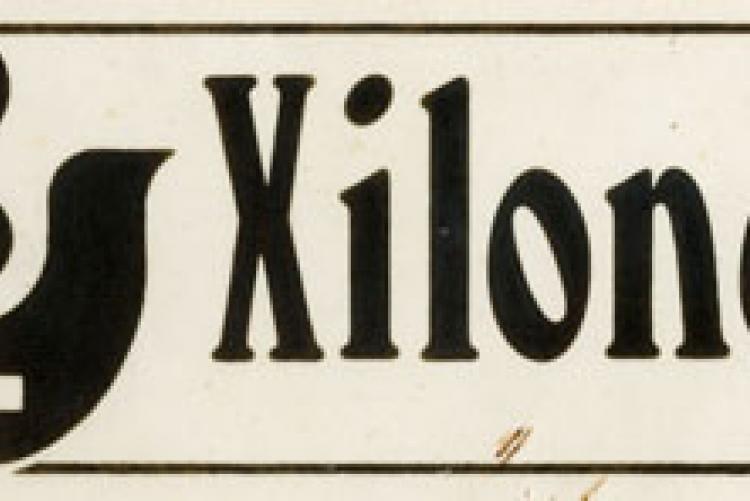 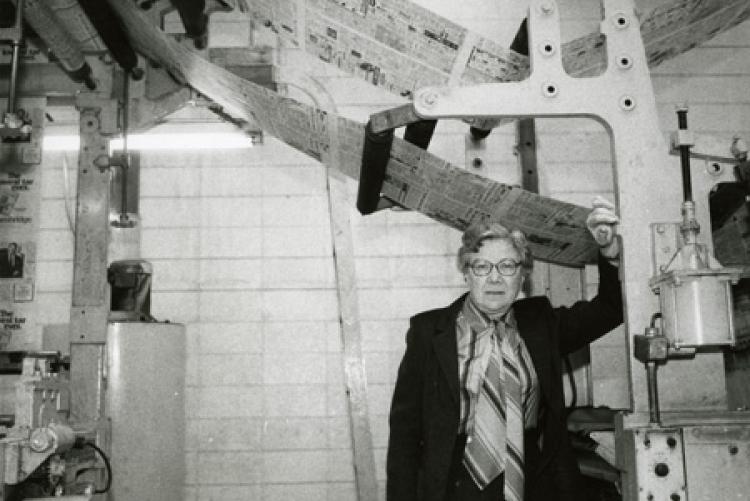 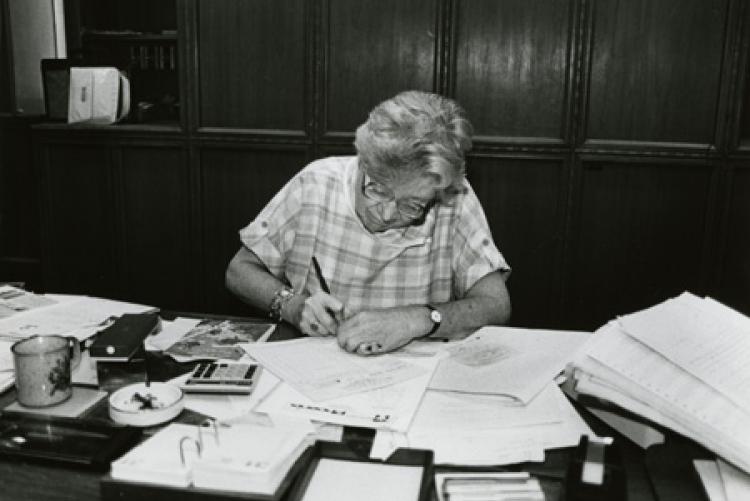 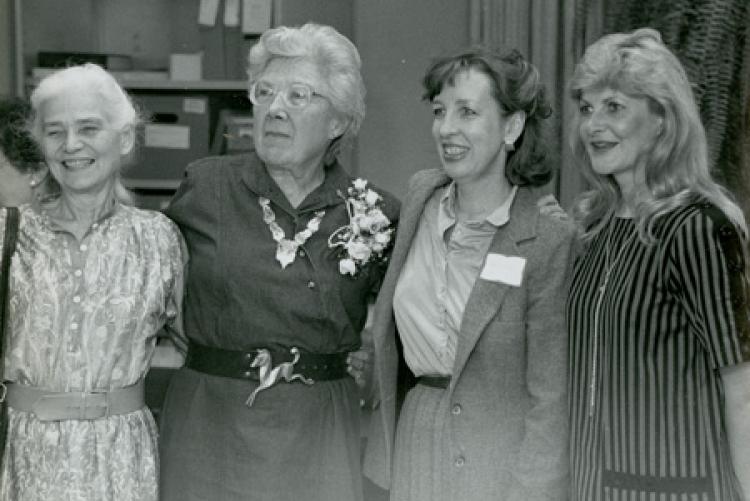 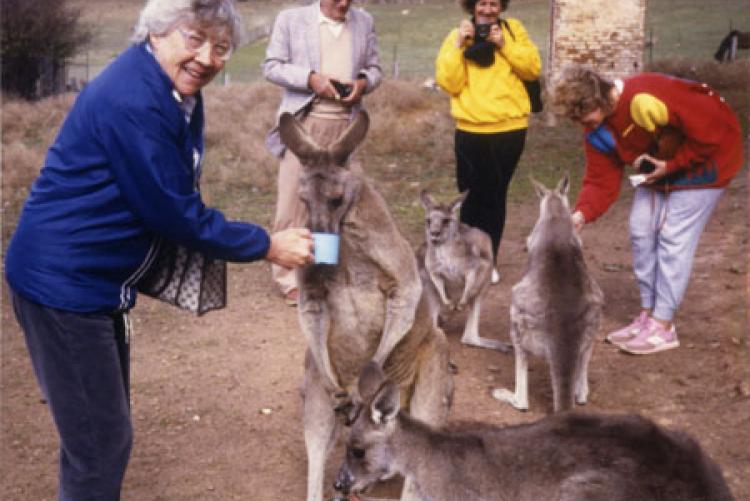 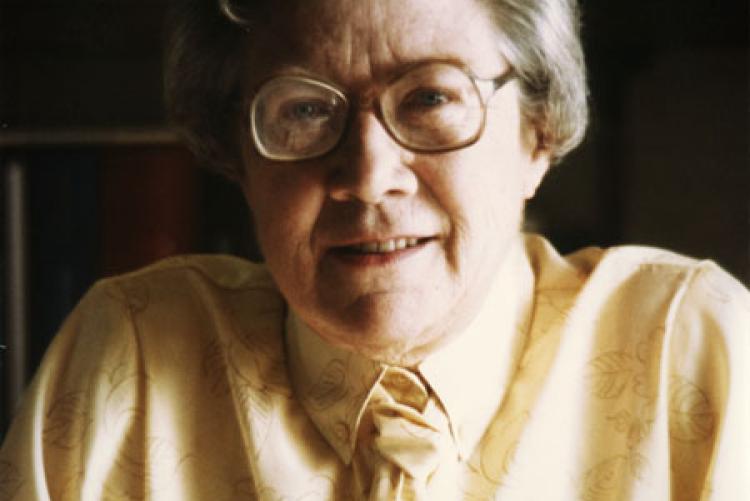 Even though Marjorie Paxson’s first job as a journalist lasted less than two years, she persevered. Over the course of her forty-two-year career, she fought the limitations of the glass ceiling, rising from reporter to publisher. Her papers reflect the struggle of the women’s liberation movement in the 1960s and 1970s and chronicle how some supporters of the movement became casualties.

Born on August 13, 1923, in Houston, Texas, Marjorie “Marj” Paxson was the daughter of Roland B. and Marie Margaret (Bowers) Paxson. As a child, Paxson knew she did not want to be a nurse or a teacher but was unsure of her career path until she took a high school journalism course. “From then on,” Paxson said, “I knew I wanted to be in the newspaper business.”

Paxson’s high school journalism teacher, a graduate of the University of Missouri School of Journalism, made such an impression on her that she decided to study journalism at his alma mater in Columbia. Her parents approved her decision but required that she first attend Rice University in Houston for two years, where she worked on the student newspaper, the Thresher. In 1942 Paxson transferred to the University of Missouri where she worked on the Columbia Missourian. She later recalled, “Certainly the experience I got on the Columbia Missourian as a student was a big factor in my getting my first job because it wasn’t the school paper, it was the town paper.”

Upon graduating in 1944, Paxson went to work for United Press in Lincoln, Nebraska, for $25 a week. After World War II ended, Paxson, like many other contemporary female journalists, was forced out of her job to make room for a returning veteran.

Still, Paxson pursued her dream. She landed a job with the Associated Press in Omaha, Nebraska, before moving to Houston, Texas, where she worked for both the Houston Post and the Houston Chronicle. At the Post, Paxson served as the society editor and worked to get more feature stories in the Sunday women’s section. On one occasion when she asked to publish a wire story about a PTA convention in the women’s pages, the male news editor told her, “I’ll never give a news story to the women’s section.”

In 1952 Paxson became the women’s editor at the Houston Chronicle. The managerial position provided her with the opportunity to oversee a staff of seven, although she did not have the authority to hire or fire employees. After four years at the Chronicle, Paxson knew she needed a new challenge. She began sending resumes across the country in search of a new job.

Paxson received a response from Dorothy Jurney of the Miami Herald. She traveled to Miami and successfully interviewed for a position as the copy editor for the women’s page. At the Herald Paxson found mentors in Jurney and assistant women’s editor Marie Anderson. She would remain at the Herald until 1968.

During her time in Miami, wide-ranging social and political changes were taking place across the world. Paxson and her colleagues lobbied for new topics such as birth control, the sexual revolution, and women’s health issues to be featured in the women’s section.

In 1968 she unexpectedly received an offer to become the women’s editor of the St. Petersburg (FL) Times. Remembering a prior conversation she had with Al Neuharth, the assistant managing editor of the Herald, in which he advised her, “Nobody’s really going to look out for Marj Paxson but Marj Paxson,” Paxson decided to take the job.

The American feminist movement, which was highly critical of women’s sections in newspapers, inadvertently created a backlash that affected women working in newsrooms across the country. According to Paxson, feminists believed that the news “should not be segregated by sex, that it should be organized by subject, and that therefore there should be no such thing as a women’s section.” Instead, feminists believed “that women should be executives all over the paper and not just women’s editors.” In response, many women’s sections in newspapers were replaced by a style section. The Washington Post replaced its women’s pages with a style section that was quickly emulated by other newspapers, including the St. Petersburg Times.

When the Times eliminated the women’s section in 1970, Paxson went from women’s editor to assistant features editor. A man was given her position as editor of the new section. Paxson admitted, “It was a very uncomfortable position to be in and very difficult for me.” Shortly thereafter, she was notified that the Times had won a J. C. Penney-University of Missouri Journalism Award, which recognizes the nation’s top reporters and editors working in women’s page journalism. Six weeks later, when her employers discovered Paxson was looking for a new job, she was fired from the Times.

That same year, Paxson landed her next job at the Philadelphia Bulletin, which still had a women’s section. Although it may have seemed like an ideal opportunity, Paxson remembered, “The Bulletin turned out to be a very difficult place to work. And the man who was my boss – he was a features editor . . .turned out to be – well, one of the worst bosses I have ever had because he didn’t trust me and he didn’t trust my judgment.” Within a short time, the Bulletin eliminated the women’s section, and Paxson was once again “exiled back to the Sunday magazine as associate editor.” She continued to advocate that the paper publish women’s news, writing countless memos to George Packard, the Bulletin’s editor. In one memo Paxson wrote,

“Mr. Packard: Today’s paper upsets me as women’s news editor. It is completely male-oriented. In fact, looking through the pages of the B section, I wonder if women do anything but sing for the president and produce babies. This male dominance of the paper is happening so regularly that I am concerned. It’s a mistake, a big mistake.”

In another memo she pointedly noted, “It seems to me that unless women are wives, mothers, entertainers—and I include beauty queens in that category—or freaks, the Bulletin does not admit that they exist.”

“The Most Important Thing I’ve Ever Done”

Paxson’s tenure at the Bulletin improved when she was reassigned as an assistant metropolitan editor. Working with two supportive male editors and a team of reporters, Paxson found herself enjoying journalism once more. While at the Bulletin, she was named editor of Xilonen, an eight-page daily newspaper published for the United Nations World Conference for International Women’s Year held in Mexico City in 1975. She hired the staff, edited copy, supervised page make-up, and oversaw distribution. Paxson recalled years later, “It was the hardest work I’ve ever done. On the other hand, it was certainly the most fascinating and I think the most important thing I’ve ever done.”

Upon her return to Philadelphia from Mexico City, she found that the Bulletin was in financial trouble. By then, Paxson was fifty-three years old and concerned she would be unable to find another job. She contacted Al Neuharth, a former colleague, who was the head of Gannett Company. Neuharth arranged for her to interview at Gannett.

She joined Gannett in 1976 as the assistant managing editor at the Idaho Statesman in Boise. That same year Paxson won the Women in Communications Headliner Award for her work as the editor of Xilonen. Two years later she became publisher and editor of the Public Opinion in Chambersburg, Pennsylvania. In 1980 Gannett named Paxson publisher of the Muskogee (OK) Phoenix.

Upon her arrival Paxson was informed by the Phoenix’s former owner and publisher, Tams Bixby III, that it was his policy that women at the paper could not wear pants. Paxson, never a shrinking violet, came in the next morning wearing a pantsuit. Later that day she held a staff meeting and announced that she would not dictate what employees wore as long as they dressed appropriately for work. That evening, several female employees purchased pantsuits and wore them to the office the next day. Times had changed since Paxson first entered the field of journalism.

The National Women and Media Collection

In 1986 Paxson opted for early retirement from Gannett. She remained in Muskogee and continued to write a column for the Phoenix. When Paxson’s accountant determined she was going to pay a substantial sum in taxes on her stock options, he recommended she donate money to reduce her tax liability. After speaking with University of Missouri faculty member Jean Gaddy Wilson about creating a collection documenting the lives of women in media, Paxson donated $50,000 and her personal papers. The Gannett Company contributed an additional $13,000 to the project. In 1987 the National Women and Media Collection was established at the University of Missouri’s Western Historical Manuscript Collection-Columbia, which is now administered by the State Historical Society of Missouri.

The Marjorie B. Paxson Papers document Paxson’s professional career as well as her personal life. The collection includes articles she wrote for various newspapers throughout her career as well as in her retirement for the Muskogee Phoenix. Paxson’s many speeches to various organizations and professional groups largely concern her journalism career and women working in journalism.

Material concerning Paxson’s work on Xilonen in 1975 can be found in the Women’s Conferences and Organizations series. Other material in that series pertains to her work on Forum 80, the newspaper of the World Conference of the UN Decade for Women, which was held in Copenhagen in 1980.

Also included in the collection is extensive correspondence from Paxson to her family while she was working in Nebraska from 1945 to 1948. The personal series includes clippings and scrapbooks as well as a diary kept by Paxson while a journalism student at the University of Missouri. Of particular note in the personal series are several cartoons and caricatures of Paxson done by cartoonists on newspapers for which she worked. The collection also contains a small amount of family material, photographs, and audiovisual material.