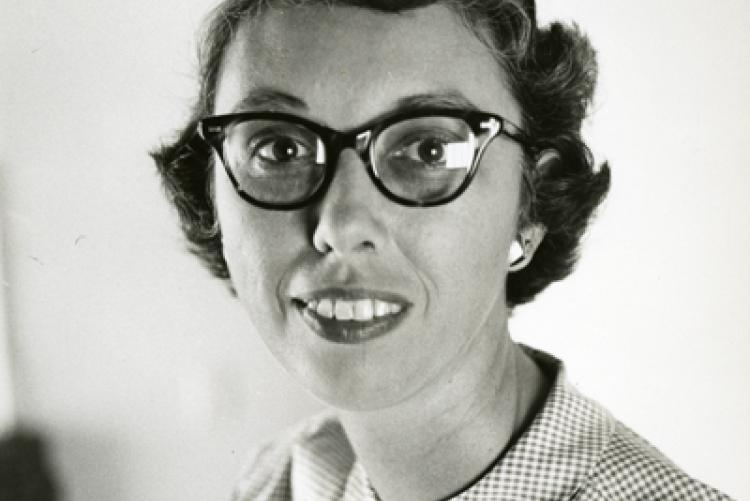 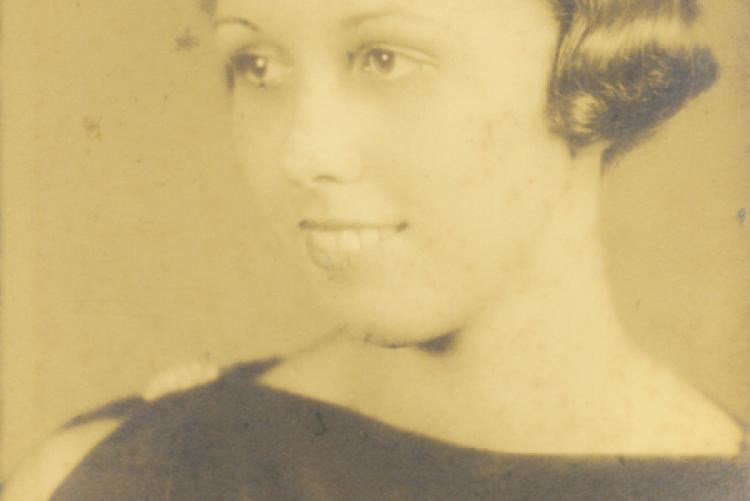 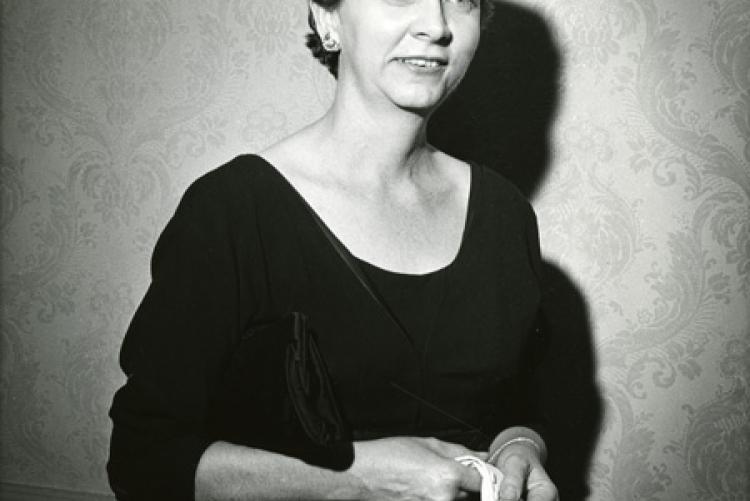 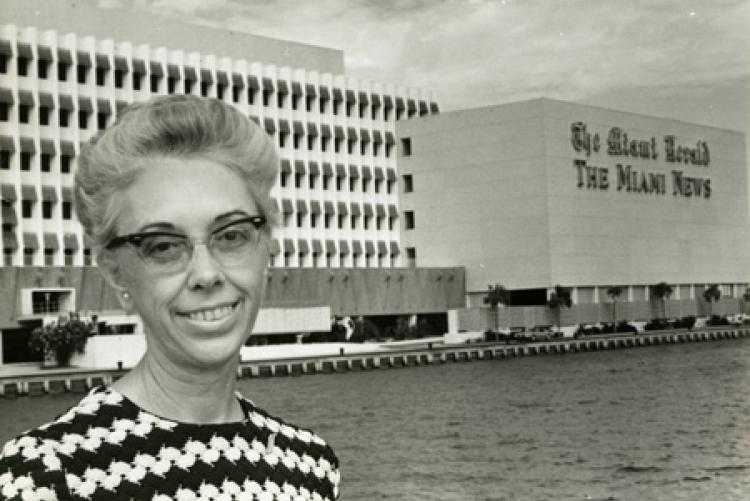 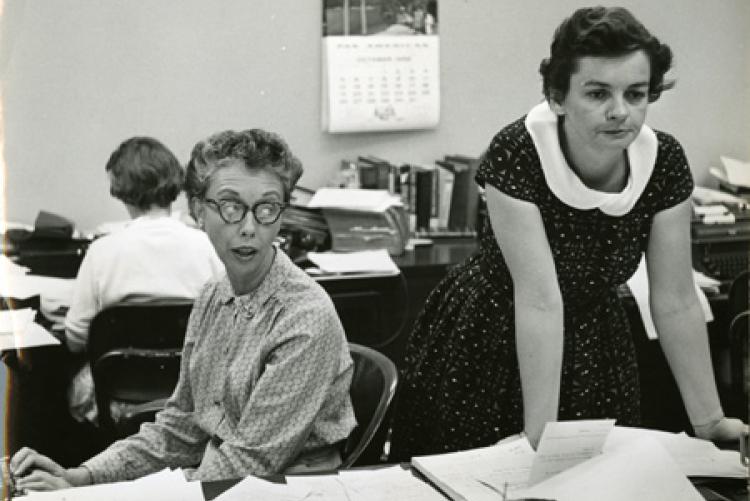 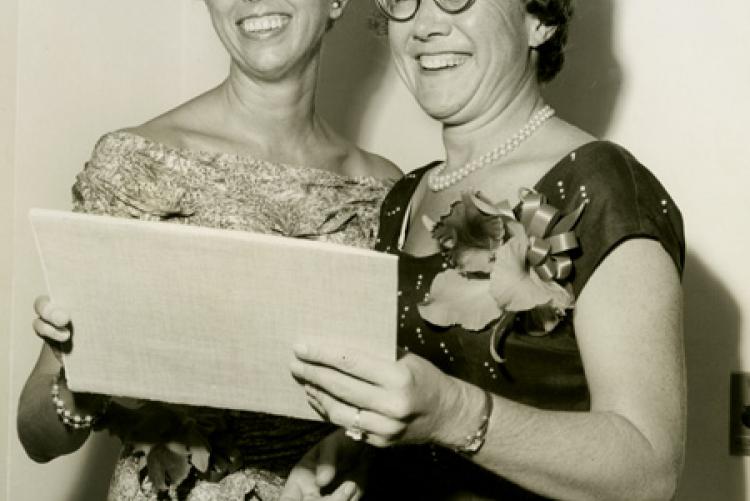 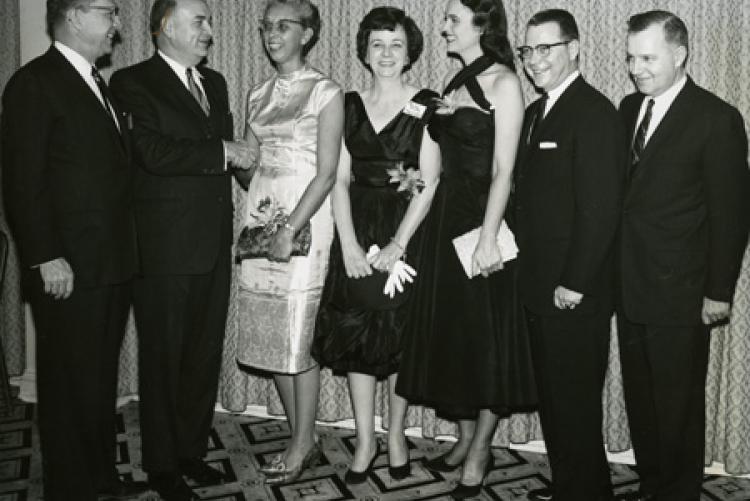 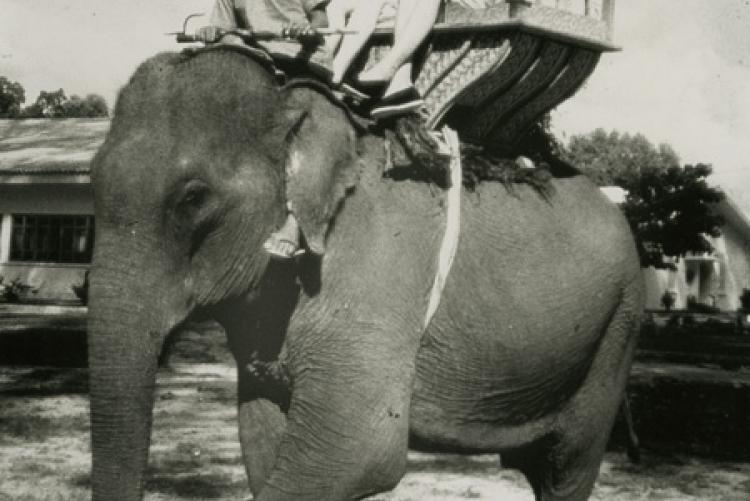 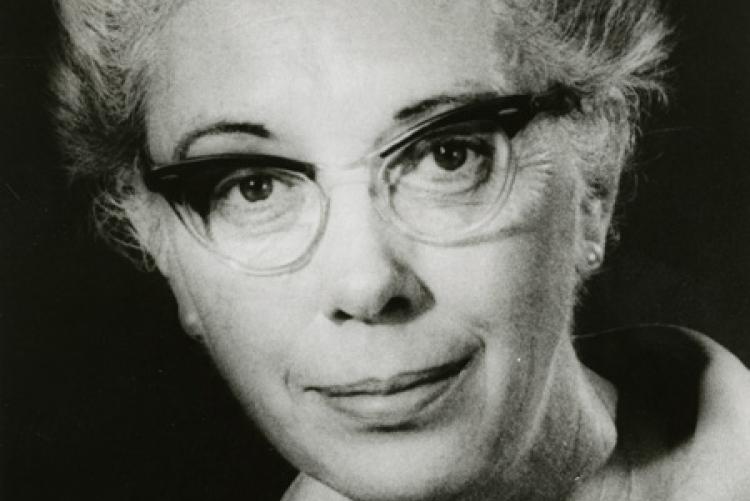 Marie W. Anderson was born on April 19, 1916, in Pensacola, Florida, to Robert Hargis Anderson and Marie Willard Anderson. Both of her parents were attorneys, although her mother never practiced law. An only child, Anderson grew up in an upper-middle-class family in Jacksonville, Florida, where she attended public school. In 1937 she graduated Phi Beta Kappa from Duke University with a bachelor’s degree in English. Anderson later recalled, “I wanted to write but there was no major in writing and it didn’t occur to me to go to a school that had one. Journalism never entered my mind.”

After graduation, Anderson “was about to go back home and play more rounds of golf” when she decided to move to New York City with friends from college. While her friends knew “what they were going to do in life,” Anderson still had not decided on a career, so she enrolled at the Katharine Gibbs School. After taking classes in typing and shorthand, Anderson graduated in 1939. She then moved to Miami, Florida, when her parents relocated there from Jacksonville.

During World War II, Anderson volunteered as the chairwoman of hotel hostesses at the Miami Beach Servicemen’s Recreation Pier Association, a military canteen organization. She played cards with servicemen, worked in the association’s library, and served soft drinks and cookies to soldiers’ wives. After the war, she returned to New York City and worked as a secretary for the advertising firm of Batten, Barton, Durstine, and Osborn. She did not remain in New York for long.

"It Is Hard Work"

Kay Pancoast, former head of Servicemen’s Pier, contacted Anderson. Now working at the Miami News, Pancoast explained that she would be temporarily leaving her job as assistant women’s editor, during which time the paper would reorganize its society and women’s departments. Upon her return, she would oversee the women’s department, and she wanted to know if Anderson would be interested in taking her old position. Pancoast announced her intent to “little by little cut loose from the woman’s angle as such, or as it is usually thought of. After all, women are interested in more things than fashions and food!”

The salary, Pancoast speculated, would be $50 a week. “The real challenge of the thing,” Pancoast wrote, “would be its possibilities. It would be a place you could be creative, and in which you could grow almost as far as you find you want to.” The job would not be without its trials. “It is hard work, Marie,” Pancoast continued, “I found that out during my brief contact with it in April. But it is interesting, and rewarding, I think. There is pressure – there would be discouraging times – and times of triumph. There just aren’t any limits to what it could be. You and I would be the only limits.”

Anderson asked the head of personnel at Batten, Barton, Durstine, and Osborn what he thought of the offer. He replied, “I think you ought to go back to Miami and take that job.” Prior to Anderson’s arrival at the News, managing editor Hoke Welch wrote to say that the planned reorganization of the paper’s society and women’s departments had been postponed. He would, however, honor the paper’s prior commitment to hiring Anderson. Pancoast, the wife of Miami architect Russell T. Pancoast, chose not to return to the News.  Instead of taking Pancoast’s position as assistant women’s editor at the News, Anderson became a cub reporter, joining the paper in 1946. She later remarked that this was a fortunate turn of events because “I didn’t have the vaguest notion what an assistant women’s editor should do.”

A Friend and Mentor

At the News Anderson met Dorothy Jurney, who had learned the nuts and bolts of journalism working for her father’s newspaper in Michigan City, Indiana. Jurney served as Anderson’s mentor and taught the younger woman invaluable editing, layout, and composing skills. The two women formed a close friendship that lasted until Anderson’s death. In 1949, unhappy with reporting society news, Jurney resigned from the News. She subsequently joined the Miami Herald where she worked on the copydesk for a year before being promoted to women’s editor. Shortly after, Jurney hired Anderson to serve as assistant women’s editor. Anderson started her own column, “Monday Musings,” that ran for over two decades, sharing her observations about everyday life and those of her readers.

“Learn the Ways of the World”

In a 1963 commencement speech to the graduating class of the Everglades School for Girls, Anderson stressed that the graduates should develop their critical thinking and analytical skills and learn to ask questions that “you would have to ask if you were a lawyer. Or a doctor. Or a scientist.” She continued:

“And even if you don’t plan to be any of these, you will spend your life reading and assessing things. Love letters. A marriage license. A lease on a home, be it a high rise apartment or an FHA-financed project bungalow. The warranty on the washing machine and the television. The brochure of the young man selling magazines at the front door. And for heaven’s sake, learn how to say no, not only to the young man at the front door, but to the washing machine, the television, the high rise apartment and all the rest if you don’t have enough money to buy them. Life can be just as much fun without them.”

On the eve of the women’s movement, Anderson advised her audience, “Don’t be upset over all this soul-searching going on about women and her place in the scheme of things. So maybe you graduate Phi Beta Kappa and two years later you have nothing but snively-nosed kiddies to talk with. Don’t let it get you down. There’s always TV. Or even a book.” She advised them, “You’d do a better job with your marriage and your children if you’d work five years, maybe ten before you decide to tackle either of them. You learn the ways of the world. How people operate. How to handle problems. How to handle money.” Anderson’s advice paralleled her own life and reflected the social, economic, and political changes unfolding in American society. Some of these changes were reflected in the Herald’s women’s pages.

Anderson, together with Herald reporter and club editor Roberta Applegate, transformed women’s club notices into news about “what women in the community, club women, were doing.” At Anderson’s behest, Applegate put together a conference to educate clubwomen about how to report their activities in a much more meaningful manner. This resulted in competition among women’s clubs to see who could do the most good for the community. Anderson later mused, “I think that the development of that put me in the position that when these Penney-Missouri contests came out, I won three of them, just simply because the rest of the people in the country were not doing that kind of thing.”

The J. C. Penney-University of Missouri Journalism Awards Program, commonly known as the Penney-Missouri Journalism Awards, was established by the J. C. Penney Company in 1960 to honor its founder, James Cash Penney. Sponsored by the University of Missouri School of Journalism, the newspaper competition originally recognized the nation's top reporters and editors working in women’s page journalism. Women’s editors from across the country entered the contest. In December 1960 Marie Anderson was visiting a friend in New York City when the telephone rang. On the other end was Anderson’s former colleague Dorothy Jurney, women's editor at the Detroit Free Press. Jurney told Anderson that she and the Press had won second place in the Penney-Missouri competition for excellence in women’s pages in newspapers. Anderson congratulated Jurney and then asked, “Who won first?” Jurney answered, “You did.” In 1988 Anderson remembered the phone call in a letter to Jurney, saying, “Twenty-seven years later I can still get excited thinking about it.”

Jurney wrote to George Beebe, managing editor of the Miami Herald, and declared, “Well, there’s no arguing with it now – So you have the damned best women’s section in the nation. Congratulations to you and all the gals. We’re proud of you, even if our head is bloody and bowed.” Anderson and her staff at the Herald won their second first-place award in 1961. This led Penney-Missouri program director Paul L. Myhre to ask that Anderson and the Herald sit out the next women’s pages competition.

Myhre wrote George Beebe, “[Marie] just can’t help it that her pages, under her administrative direction, have been the best.” After sitting out the 1962 competition, Anderson and her staff came in second in 1963, followed by another first-place finish in 1964. In 1965 the Penney-Missouri Awards honored Anderson and the Herald with its Diamond Tri-Ara award for winning three first-place awards and then barred them from competing for five years. She continued, however, to participate in the organization’s yearly workshops, helping to guide a new generation of women’s editors. In 1969 Anderson and the Herald reentered the competition and won yet another first-place award. It would be her final Penney-Missouri Award. Anderson was also the recipient of multiple Florida Women’s Press Association Club awards and received a Headliner Award from Theta Sigma Phi (now Association for Women in Communications). Anderson’s success, however, could not keep her from feeling burned out.

In a letter to Paul Myhre in 1970, Anderson confessed, “I’m tired of being women’s editor and I have had some conversation with Roland Dopson about what other possible value I might have for the Miami Herald on a part-time basis.” She confided that she had planned to work part-time and enjoy the coming decade with a former classmate, “but he has different ideas but I guess I might as well learn to enjoy them by myself.” Anderson added, “Since I’ve mended one broken heart I guess I can mend another.”

She requested a transfer to the Herald’s city room but was instead transferred to the home and design department. She spent her time exploring Miami neighborhoods and writing stories about historic homes and real estate. Anderson enjoyed the switch from management to reporting, relishing the fact that “I could do anything I wanted as long as it had something to do with a house.”

Anderson left the Herald in 1972 to become dean of University Relations and Development at Florida International University. She later admitted, “I didn’t know what I was getting into at FIU, really.” Anderson found that “universities can be the world’s best backbiters you can ever run into.” After five years, Anderson retired from her university position but continued to stay active. She served as editor of the Historical Association of Southern Florida’s magazine, Update, from 1979 until 1988. In 1980 she wrote Julia’s Daughters: Women in Dade’s History on behalf of women’s group Herstory of Florida. During the last years of her life, Anderson was diagnosed with Alzheimer’s disease. She died on July 2, 1996, in Altamonte Springs, Florida.

Toward the end of her career as a women’s editor, Marie Anderson remarked, “I’m not sure there is a place for so-called society news. People news, yes. What society does to benefit society, yes. But society for society’s self-gratification, no.” Instead of reading solely about “family, food, fashion, and furnishings,” women who read the Miami Herald could find articles about women’s health issues, women in the workforce, and women in politics, subjects that are now standard news stories. Late in her career, Anderson observed, “My satisfaction comes when a completely unknown person writes, ‘Thank you for your women’s section. You don’t know how it has changed my life for the better.’” Anderson’s work as a women’s page editor changed the lives of countless women and created a legacy for a new generation of journalists to build upon.

The Marie Anderson Papers are processed. Correspondence, writings, subject files, photographs, travel diaries, and other materials make up the bulk of the collection. The collection contains a significant amount of correspondence between Anderson and fellow journalist Dorothy Jurney.