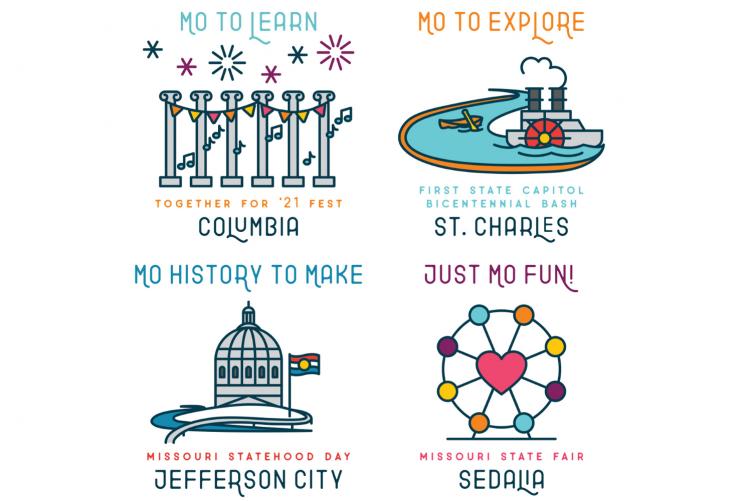 Plans to commemorate the bicentennial include the Together for 21 Fest organized by the State Historical Society of Missouri and the University of Missouri. The three-day festival, August 6-8, will be held at the Center for Missouri Studies and the MU campus in Columbia. The event will include live music, folk art demonstrations, children’s programming, talks/lectures, documentary film screenings, and bicentennial traveling exhibits.

Events are being developed with COVID-19 safety measures during the pandemic and in-person activities will adhere to local and state health guidelines at the time of the event. Some events will also be live-streamed for Missourians unable to attend in person.

On Saturday, August 7, 2021, First Missouri State Capitol State Historic Site will host a bicentennial commemoration event for the public in St. Charles. The historic site is where Missouri’s first legislature met from 1821 to 1826 before the State Capitol was moved to Jefferson City. Tour the historic rooms where statehood began, attend lectures, and walk the stationary parade route. The event is being organized by Missouri State Parks.

Several days of bicentennial festivities will take place in Jefferson City from August 8-10. These events include a Gold Star Memorial dedication, the dedication of the Bicentennial Bridge, a Statehood Day ceremony in conjunction with a U.S. Naturalization ceremony, and an ice cream social. The Missouri Bicentennial Commission is planning the State Capitol events, including an invitation to Missourians throughout the state to plan an ice cream social in their communities on August 10. Sign up for the statewide ice cream social at missouri2021.org and share photos using the hashtag #ScoopsAcrossMissouri.

The Missouri bicentennial is the theme for the Missouri State Fair, August 12-22 in Sedalia. Our Missouri Celebration will include special bicentennial events and exhibits, along with livestock shows and competitive exhibits, entertainment, motorsports, and other regular State Fair offerings.