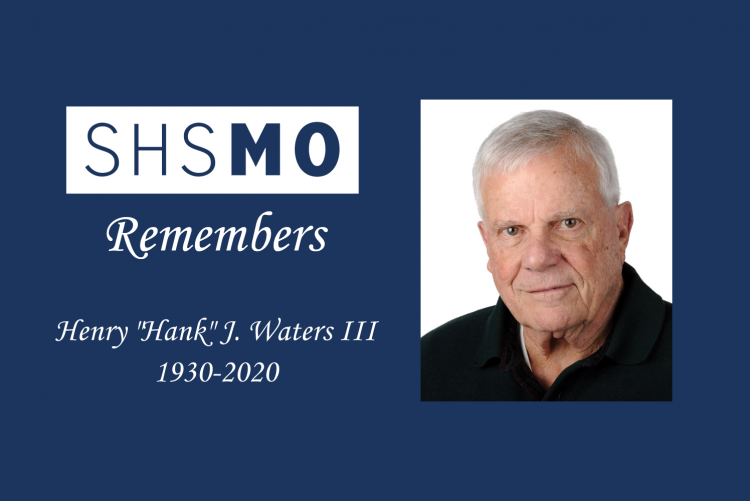 Henry J. Waters III was born in St. Louis, Missouri, on June 7, 1930. He spent nearly his entire life in Columbia. After graduating from University Laboratory School in 1947, Waters enrolled at Washington and Lee University, before earning a bachelor's degree in political science from the University of Missouri-Columbia in 1951.

Waters' family held deep ties to the newspaper business, including his great-uncle, Ed Watson, and his father, Henry J. Waters II, serving as owners and publishers of the Columbia Daily Tribune. In his youth, Waters worked as a paperboy for the Tribune. Upon completing his undergraduate degree, he began to work full-time in the Tribune's advertising department. He became advertising manager in 1959. From 1966 to 2010, Waters served as the Tribune's publisher. After retiring, Waters moved to publisher emeritus when his wife, Vicki Russell, became publisher. Even after the Tribune was sold in 2016, Waters continued his fifty-plus year career of editorials on local, state, and national issues. In addition to his newspaper background, Waters also worked to promote organizations and civic affairs in Columbia and Boone County. He became a trustee of the State Historical Society of Missouri in 1992, and as of 2020, served as the Society's Fourth Vice President. Henry J. Waters III passed away on August 20, 2020.

In the following audio clip from his 2019 oral history interview, Waters talks with Chip Cooper and SHSMO's Sean Rost about the importance of editorial commentaries in the newspaper business.

ROST: I have a question. In terms of writing editorials and really running the paper, you mentioned how you had good relations with people in the university, but, at the same time, as an editorial writer, you're also critiquing elements of what's going on in the community.

WATERS: That's a kind of fine balancing act, and it can be done. If you can develop a reputation for being sincere and honest and objective, but fair—you know, some newspaper people get in the bad habit of thinking they have to get you every time. You can be expository without being mean and nasty and unfair. That's what I always think is the best way to do it. That way you have respect. You can be critical without losing the support and affection of the community.