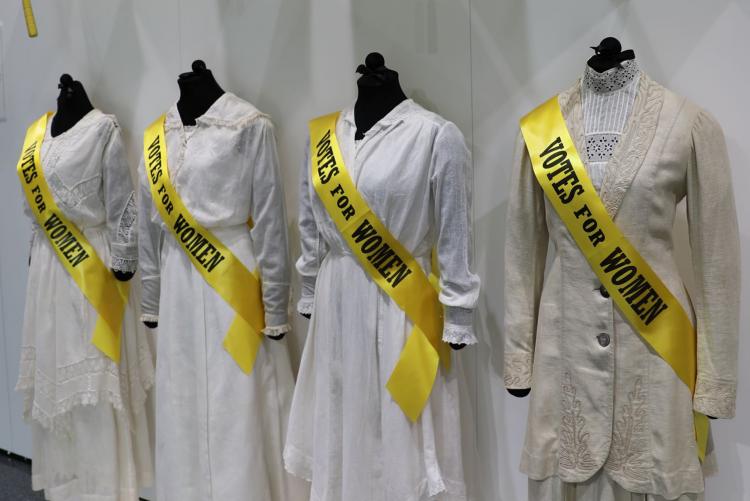 As America celebrates the centennial of the 19th Amendment that gave women the vote, join us for a two-part program that provides a deep dive into women's suffrage in Missouri.

In Part One, at 12 p.m., radio host Kevin Walsh talks with historian and activist Margot McMillen about the circumstances surrounding a silent protest for women's suffrage in St. Louis that took place on the opening day of the 1916 Democratic Convention. McMillen is the author of several books on Missouri history, including The Golden Lane: How Missouri Women Gained the Vote and Changed History.

Part Two begins at 6 p.m. with a short video tour of the current SHSMO exhibition Missouri Women: From Suffrage to Statecraft—a collaboration with the Missouri Historic Costume and Textile Collection. Walsh will interview SHSMO art curator Joan Stack along with MHCTC curator Jean Parsons and collection manager Nicole Johnston about the various clothing, artwork, and objects on display.

Both of these events are free and available online. Registration is required.

Margot McMillen is author of The Golden Lane: How Missouri Women Gained the Vote and Changed History and other books on Missouri's courageous women. She is retired after a career of teaching English composition at Westminster College and lives on a small farm in Callaway County. As a farmer with deep interest in the local food system, she writes about the resiliency of local production and hosts "Farm and Fiddle," the world's oldest radio program focusing on sustainable agriculture. She is also hard at work finishing a book about the women who knew Mark Twain best—his mother, sister, wife, daughters and others.  She says, "After beginning to write about Missouri women, there was no turning back. It's the most interesting subject on the planet."

Jean Parsons is a professor at the University of Missouri in the Textile and Apparel Management Department and curator of the Missouri Historic Costume and Textile Collection. A recognized scholar in both design and history, her research includes digital textile and apparel design and history of the apparel industry. She is a Fellow of the Costume Society of America and has co-authored (with Sara Marcketti) Knock-it-off! A History of Design Piracy in the U.S. Women’s Ready-To-Wear Apparel Industry.

Nicole Johnston is the collection manager for the Missouri Historic Costume and Textile Collection and also serves as an instructor and advisor in the Department of Textile and Apparel Management at the University of Missouri. Since 2012, she has taught History of Western Dress, and beginning in 2021, she will also teach 19th and 20th Century Western Dress. In her courses, Johnston looks for opportunities to bring collection objects into the classroom.

A native Missourian, Joan Stack received her Ph.D. in art history from Washington University in St. Louis. She spent five years as curator of European and American art at the University of Missouri's Museum of Art and Archaeology before joining the SHSMO staff as curator of art collections in 2006. Her research interests include George Caleb Bingham, Thomas Hart Benton, and the study of material culture's role in shaping historical memory.

A native of Scranton, Pennsylvania, Kevin Walsh has lived in Columbia for more than half of his life. He received a bachelor of arts degree in English from the University of Scranton and continued his education at the University of Missouri. Walsh works as the senior security guard at the Society’s Center for Missouri Studies.

Hosting "The 'So-Called' Good Life” on KOPN since 2000, Walsh has also helped to increase awareness of the Society's unique collections and programs as a local writer.