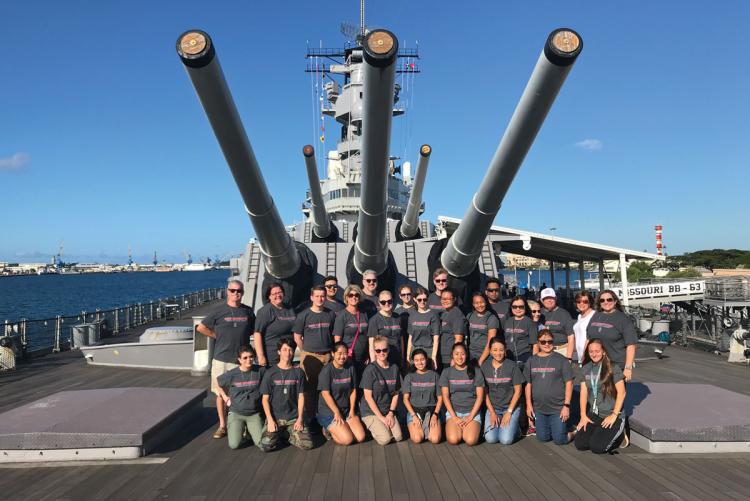 Students and teachers on board the USS Missouri as part of the World War II in the Pacific Student & Teacher Institute.

Twelve pairs of students and teachers—six from the mainland, and six from Hawaii—stood solemnly on July 28 for a ceremony at the National Memorial Cemetery of the Pacific in Oahu. They were there for the culmination of the Sacrifice for Freedom: World War II in the Pacific Student and Teacher Institute, in which each student spends six months researching an American whose life was sacrificed during the war.

Katherine Mackenzie, a junior at Liberty North High School in Liberty, and her teacher, Kimberly Brownlee, were Missouri’s representatives at the Institute, which is coordinated through National History Day and sponsored by a consortium of organizations within the Pearl Harbor Historic Site Partners. Mackenzie studied the life of Corporal Carl W. Alderson, a farm boy from Cass County, Missouri, who served in the US Army Air Forces. Corporal Alderson was a member of the Army Air Corps and served in HQ & Base Service Squadron of the 72nd Service Group, which provided maintenance for the B-29 bombers on Tinian Island. While on duty, he died in a truck accident, two months shy of his 21st birthday.

The student-teacher teams arrived in Oahu on July 23 and spent the rest of the week visiting sites that provided context for understanding events in the Pacific during World War II, particularly the attack on the island’s Pearl Harbor. The week included a tour of the Pearl Harbor Aviation Museum, a visit with forensic scientists at the Department of Defense’s POW/MIA Accounting Agency Laboratory, and climbing the steps of the Ford Island Field Control Tower, which broadcast the first warning that Pearl Harbor was under attack. The group also visited the site of the Honouliuli Internment Camp for Japanese Americans, and stayed overnight aboard the USS Missouri, the ship on which the Japanese surrender took place in Tokyo Bay on September 2, 1945. The Missouri is now anchored at the spot where the USS Oklahoma was sunk in Pearl Harbor.

On the program’s final day, the students went to the cemetery to deliver eulogies of the fallen heroes they had studied. Standing at Alderson’s tombstone, Mackenzie tearfully reflected on his life, observing that “like so many others, Alderson’s death, and more importantly, his life, serve as a reminder that even seemingly small sacrifices contribute to the fight for what should be in an imperfect world.”

“This program helped me understand that history is not as distant as it seems, not only physically, but also in that it tends to repeat itself,” Mackenzie said. “Hearing people’s stories at each location we visited, along with our research, brought history together.”