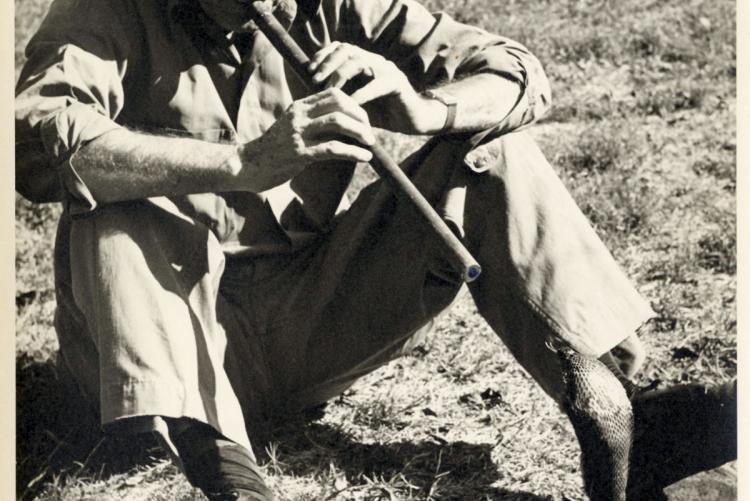 Brice Lipscomb poses as a “snake charmer” with a stuffed cobra, Springfield, Missouri, 1953.

For three months in 1953, the residents of Springfield, Missouri, lived in fear as deadly snakes roamed the Queen City of the Ozarks. Town residents armed with hoes, pitchforks, and long poles patrolled the streets, and children were not allowed to play outside. The Great Cobra Scare of 1953 is legendary in Springfield history. Life and Time magazines sent reporters to cover the story. Eleven cobras were eventually apprehended, but no one knew where they came from until 35 years later.

A resident killed the first snake with a hoe on August 15. Reo Mowrer, owner of Mowrer Animal Company, a pet shop located a block away from where the snake was killed, identified it as a harmless species and swore it had not escaped from his shop. When the second snake was killed, Herbert Condray, a science teacher at Jarrett Junior High School, correctly identified the highly venomous cobra native to India. Over the next three months, nine more snakes were killed or captured in garages, yards, and under houses, or were run over by cars. Weapons used to dispatch them included hoes, shovels, rocks, and firearms. Although they were not sure what to do, city officials felt they had to act. On October 5, Del Caywood, the acting city manager of Springfield, rented a truck with a sound system and drove around town blaring a “snake-charming” song called “Cobra Blues,” hoping it would lure any snakes out of hiding. The mob following the truck waited for any cobra to show itself. A snake was killed that day, but it is unlikely “Cobra Blues” played any part, since snakes have no sense of hearing. The city got back to normal when no further cobras were found, but Springfield’s residents were left wondering what had happened during those three stressful months in 1953.

It took more than three decades to learn the truth. In 1988, Carl Barnett confessed to freeing the snakes to get even with the pet shop owner, who had refused to give him a refund on a tropical fish that died hours after he purchased it. Fourteen-year-old Carl had no idea what kind of snakes were in the crate behind the pet store when he released them. One of the captured cobras was stuffed by local taxidermist John Smades. When his work was finished, he invited Brice Lipscomb over to have a look. Lipscomb took the opportunity to pose for a photograph with the cobra.

Fast-forward to the summer of 2019 when 93-year-old Robert Lipscomb, the son of Brice Lipscomb, confirmed that the snake in the photograph was the tenth cobra killed. The photos and newspaper articles from the 1953 cobra scare are part of the Robert Lipscomb Photograph Collection, which also includes an oral history with Robert in 2019, as well as photographs from his 35-year career with the Missouri Department of Conservation and a photograph of President Truman walking in a Springfield parade celebrating the reunion of the 35th Infantry Division on June 8, 1952. Photographs of various locations around Springfield and Rolla are also included in this collection.