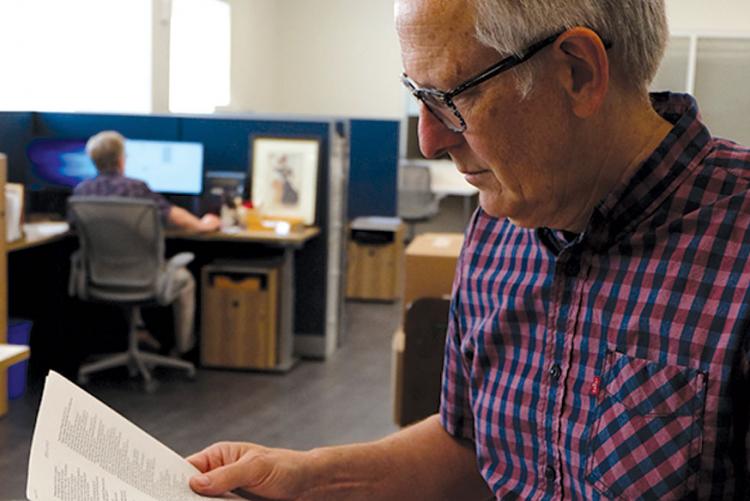 Patrick Atkinson finds there’s no better way to quench his thirst for knowledge than by keeping an active mind—at any age. The retired University of Missouri theater professor leads a busy schedule, volunteering with a number of organizations in Columbia. Several times a week he helps build mobility carts for people without access to wheelchairs in developing countries. During tax season, you can find him at the public library assisting others as they complete their tax forms. He also has been a steady volunteer for SHSMO, coming in twice a week since 2013.

“He’s exceptionally versatile,” said State Historical Society Archivist Heather Richmond. “Patrick has been essential to the World War II Letter Project, transcribing almost 2,000 pages over the past several years. And he’s accomplished it with such speed and accuracy.”

Atkinson’s work has helped the Society’s archivists transcribe and digitize the popular World War II Letters Project collection, a cache of more than 4,000 letters written by US servicemen and women. More than 3,000 of them are now online. The letters were sent to Kansas City radio personality Ted Malone, who requested them for a book project while hosting the ABC show Between the Bookends in 1945. The book never materialized, but the correspondence found its way to SHSMO through various donors.

The State Historical Society is a natural fit for Atkinson, who did a lot of history research during his 31 years as a member of MU’s faculty. His area of expertise in theater is scenic design and lighting. “When you design shows, you look at them historically, whether they are Greek, Shakespeare, or as modern as 20 years ago,” he said. “You have to do the research. There are many, many hours and weeks spent researching the time period of each production.”

Atkinson, a Florida native, said that when he started volunteering with the Society, he did not realize how captivated he would be by Missouri’s history. Offering an example, he said he had no idea how divided Missouri was during the Civil War, having formed a different perspective on the war based on what he was taught while growing up in the South. “It opened my eyes to both sides,” said Atkinson, who has scrolled through microfilm of the state’s Civil War–era newspapers.

Atkinson has also contributed some of his own photographs to SHSMO’s collections. While digitizing photographs from the Historic Inventory of Columbia, Missouri (P0052) collection, he was struck by images that were shot in 1978, shortly before his family moved to Columbia.

“There were 600 to 800 images of laundries and stores in central Columbia 40 years ago,” Atkinson said. “The laundries are gone, as well as many of the shops. It was fascinating to see how the downtown area has changed over the decades.”

The photos inspired him to take his own pictures of Columbia’s downtown earlier this year. Viewed next to the 1978 photos, his images capture examples of the downtown area’s transformation over four decades. Atkinson’s photographs now comprise the Survey of Buildings and Businesses in Columbia, Missouri Photographs (CA6524) collection.

“I’ve lived in this community for so long, and I’m intrigued by its history and colorful past,” Atkinson said. “Working in the stacks to uncover bits and pieces of new information can be a challenge, but I always find what I’m looking for, eventually. I just enjoy helping people and contributing to our state’s history.”

Basic Genealogy: Getting Started
Getting started is often the most difficult part of accomplishing a task, and genealogy is no exception. Join Associate Director of the Cape Girardeau Research Center, Bill Eddleman, to learn how to assemble what you already have—or can easily access—while getting tips on how to stay organized, interview relatives, keep focused, maintain a record of your research, and determine research locations. Online and free. Registration is required.

Join Assistant Director of Manuscripts, Laura Jolley, to learn how to organize and care for your personal photograph collections. Receive tips on how to get started, arrangement and storage options, and basic preservation information, so your photos will last for generations. Online and free. Registration is required.