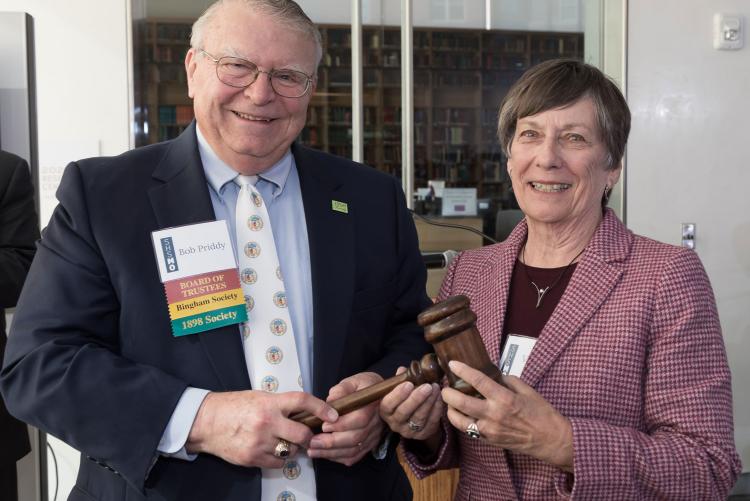 At the Annual Meeting on November 2, trustees elected Virginia J. Laas as president of the State Historical Society of Missouri. Laas, of Joplin, is the second woman to serve as the Society’s president. The first was newspaper publisher Avis Tucker, who was president from 1992 to 1995.

“I have watched this organization take giant leaps forward over the past 24 years,” said Laas. “Just like the Apollo 11 moon landing that we celebrated on its golden anniversary in July, we, too, have moved heaven and earth to be where we are today.”

Laas is an author and professor emerita of history at Missouri Southern State University in Joplin. She is also currently on the board of the Post Memorial Art Library and the advisory board for the Sherwood/Rader Farm Civil War Memorial Park in Jasper County. She is a past president of the Missouri Conference on History. Laas has been a trustee of the Society since 1995, a member of the Missouri Historical Review editorial advisory board since 1999, and on the executive committee since 2003.

Trustees who were reelected for a new three-year term include James Leon Combs, Bryan Cook, Michael R. Gibbons, Larry L. McMullen, and Mary R. Russell. New to the board is Ann Covington, who was the first woman to serve on the Missouri Supreme Court in 1989 and as chief justice of the state’s highest court in 1993. Covington is a curator emerita of the University of Missouri.

As the meeting ended, Executive Director Gary Kremer presented the State Historical Society of Missouri’s Distinguished Service Award to Priddy, a trustee since 1985 whose presidential term marked the beginning of a new era with the completion of the Center for Missouri Studies building.

“Bob has been a constant supporter, our ‘pied piper,’ who has shared the important work of what we do with audiences across our wide Missouri and beyond our borders,” said Kremer. “We can’t thank him enough for his hard work and dedication.”