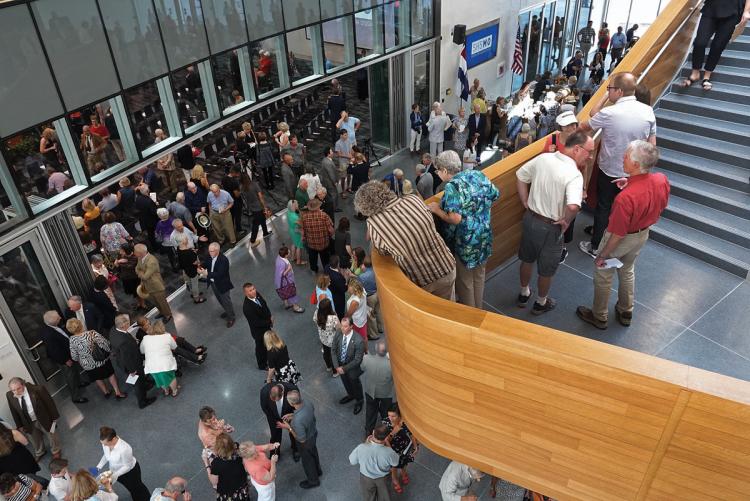 The Center for Missouri Studies opened in grand style on August 10 with ceremonies and celebrations attended by about 1,200 supporters of the State Historical Society of Missouri. On a day chosen to coincide with the 198th anniversary of Missouri statehood, crowds witnessed elegant speeches and a ribbon cutting before pouring through the Center’s south front doors for the public’s first look at SHSMO’s new headquarters.

The festivities began with a “Night of Gratitude” on August 9 for supporters who donated substantial gifts to help with building costs. SHSMO Trustee Beatrice Litherland Smith, the master of ceremonies for the evening, and others spoke about the persistence of Executive Director Gary Kremer and the determination of a bipartisan legislature to secure $35 million in state bonds for the building.

“We call it the Miracle on Elm Street,” Smith said, noting the long and difficult road to the building’s completion. For years, efforts to raise money for a new headquarters ran into crises such as the Society narrowly dodging elimination from the state budget in 2005, or its staff volunteering to accept a 20 percent pay cut to avoid layoffs in the wake of the 2008 recession. Through it all the Society’s trustees forged ahead, continuing talks with lawmakers to fund a new building and keep the organization financially secure.

“We all lived in Gary’s vision,” said SHSMO President and longtime Trustee Bob Priddy in his remarks following Smith’s. Judge Stephen Limbaugh Jr., a State Historical Society trustee and former president, told the evening audience how key legislators such as Ron Richard, Kurt Schaefer, and Caleb Rowden—backed by staunch support from US Senator Roy Blunt, a SHSMO trustee and officer—finally gained passage of the bond issue in 2015.

The following morning, under a large tent in the University of Missouri’s Peace Park, several speakers recalled how lawmakers worked across the aisle to make the Center for Missouri Studies possible. “If we are going to resurrect the mentality of the greater good, I think we have to be reminded of, and have documentation of, moments in history where that was the way the world was,” said State Senator Rowden.

Missouri Lieutenant Governor Mike Kehoe presented a gubernatorial resolution on behalf of Governor Mike Parsons, who was out of the country on state business. Missouri Senate and House resolutions were presented by Senator Dan Hegeman and Representative Kip Kendrick.

Columbia City Councilman Clyde Ruffin, representing Mayor Brian Treece, who was out of state, likened the State Historical Society to Ghana’s legendary Sankofa bird, a mythical creature with its feet firmly striding forward, but its head turned backward, carrying an egg in its beak. “The word from the Akan tribe translates this to mean, ‘go back to the past and bring forward that which is useful,’” said Ruffin. “The story of past, present, and future are cherished and celebrated here. More than dates or storing historical documents, it’s the ‘why’ that is most important.”

In his remarks, former Missouri Governor and US Senator Kit Bond recalled that in his first gubernatorial term, sketches of George Caleb Bingham’s art were to be sold at auction. A campaign supported by tens of thousands of Missourians, many of them schoolchildren, succeeded in keeping Bingham’s art collection in Missouri. Bond said the dedication of the new building offered further proof of the state’s passion and resolve for preserving its history and heritage. “I entrusted the Society with my own papers as governor and senator—all 400 boxes,” Bond said. “Good luck to someone who reads all of that someday!”

University of Missouri President Mun Choi and MU History Department Chair Catherine Rymph also addressed the morning audience. “Archives are our labs,” Rymph said of her profession. “It’s where the raw materials of our work are collected, preserved, and made accessible to any researcher who wants to use them. This beautiful building is going to attract historians from near and far. There are so many critical points in our nation’s past, and Missouri has been the center of that story.”

SHSMO Executive Director Gary Kremer told the crowd that the long-awaited building would fulfill many purposes. “But one of the most important is that it will allow us to further our educational mission in ways we couldn’t do before,” said Kremer. “This is your Center for Missouri Studies. It houses your history,” he said, urging the public to become regular visitors “of our new home.”

After the speeches, the Society’s trustees gathered at the south door, and Kehoe and Priddy cut the ribbon to officially open the building. As guests mingled inside and toured the first and second floors, feelings of awe and excitement prevailed.

“I’m so looking forward to coming here to do research,” said journalist and author Steve Weinberg, who made frequent visits to the Society several years ago while working on a biography of business tycoon Armand Hammer. “This place is just beautiful!”

Columbia resident Pat Fowler said she was eager to see inside the building after watching it rise over the past two years. She said she has become a SHSMO member and plans to “hide out” in the research center. “It is so magical seeing wall-to-wall book shelves,” Fowler said. “It brings me immense joy being in this room. The entire building is incredible. I feel so welcome here.”