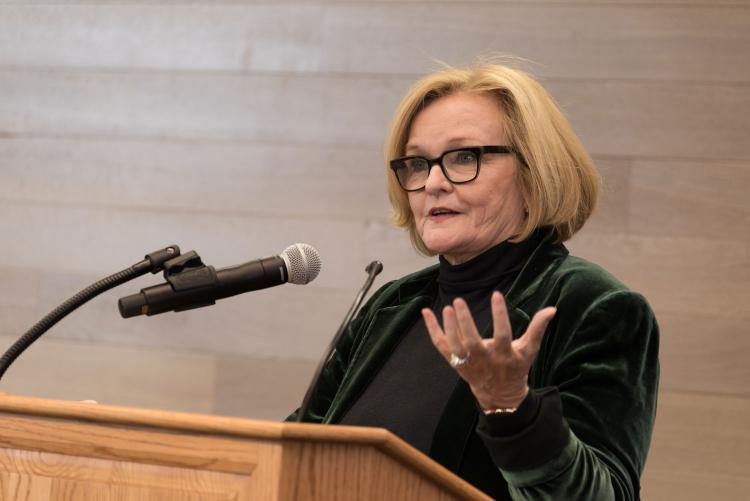 Former US Senator Claire McCaskill delivers the inaugural My Missouri lecture at the Center for Missouri Studies on November 2.

The State Historical Society of Missouri launched the My Missouri Lecture Series on November 2 with a talk by former US Senator Claire McCaskill. The inaugural lecture, which also served as the keynote address for SHSMO’s Annual Meeting, highlighted the schedule of events for the first annual gathering held at the new Center for Missouri Studies building in Columbia.

The My Missouri series invites its speakers to reflect on what being a Missourian has meant to their personal lives and careers. McCaskill addressed that theme by focusing on the “strong old-fashioned values” she learned from her Missouri family.

McCaskill spoke about her grandmother, Mildred, describing a week of her life as a single mother at a time “when good folks didn’t let that happen.” Her grandmother had left her husband, an alcoholic gambler, and moved in with her sister and brother-in-law in Lebanon, Missouri.

“They were a nontraditional family in a very small town. Yet, they reflected Missouri’s values,” said McCaskill, who described how difficult their lives were as they struggled to make ends meet by running a small corner drugstore. “Yet, despite the long work hours, they were active in town, church, and civic projects. Instead of resting on my grandmother’s day off, she baked bread all day and brought it to those who needed nourishment,” said McCaskill, reflecting on the strong impression her family elders made on her.

“Hard work, community, family. There is a sharing of those values in our great state,” said McCaskill, citing a Pew Research Center study suggesting that despite widening social and political divisions, most Americans hold similar values when it comes to their families and communities.

“Their values are very similar,” McCaskill said. “People in rural and urban communities feel attached to where they live. They value being near family and are nearly identical in their concerns of poverty, job, drug addiction, and economic insecurity. But we are embracing a virulent form of tribalism where we can’t agree on the facts.”

McCaskill encouraged audience members to talk regularly with someone who disagrees with them. “President Truman said it best: that it’s our understanding that gives us an ability to have peace. We must rely on our values to knit us back together.”

McCaskill was introduced by US Senator and SHSMO trustee Roy Blunt, who requested the opportunity to present his former Senate colleague. Although they belong to opposite political parties and often find themselves in disagreement, both Blunt and McCaskill say they regard each other as friends. They kept in steady communication while representing Missouri in the Senate.

McCaskill recalled an early encounter with Blunt when she was a state legislator and he was Missouri’s new secretary of state. After she opposed efforts to open additional offices for the secretary of state in Kansas City and St. Louis, McCaskill received a messenger from powerful Republican State Senator Dick Webster who told her that “every single piece of legislation you touch is now dead.” In contrast, Blunt quietly visited her office to explain why he thought the additional offices were necessary. “Roy used the velvet glove,” she said. “Much more effective.”

The My Missouri Lecture Series will continue in 2020. Former US Senator John Danforth will be the next speaker in the series. His talk will be in St. Louis at a time and place to be determined.