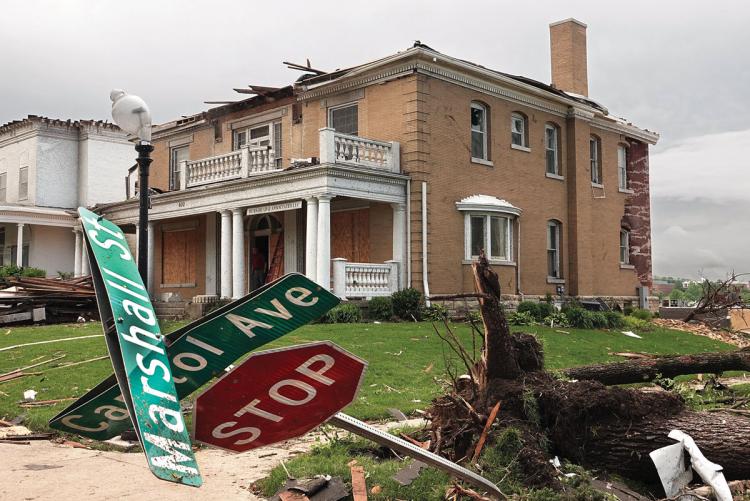 Historic homes along Capitol Avenue were heavily damaged by the May 22, 2019, tornado in Jefferson City, Missouri. Photo courtesy Jeff Bassinson.

Mother Nature is unpredictable and terrifying at times. Missouri has faced more than its share of extreme weather this year, with damaging tornadoes and raging floodwaters affecting many parts of the state. In May, tornadoes swept across southwest and central Missouri, with one killing three people in Barton County and another ravaging Jefferson City. The one that struck the capital city tore through a historic district of hundred-year-old homes and businesses, as well as other neighborhoods.

In the aftermath of such devastation, moments of healing emerge. Recovering pieces of personal history offers one way to find small victories in the face of adversity. A couple is reunited with a photo of their wedding day, or a vacation photo is found and returned to its family. Often libraries, newspaper offices, and police departments become places where rescued items are dropped off. In the days following the Jefferson City tornado, photos, an oil painting, baseball cards, and a pair of glasses found their way to the local public library.

“A patron messaged us on Facebook with the idea of our library being a lost-and-found location for photos after the tornado,” said Natalie Neville, marketing manager for Missouri River Regional Library. “As a library, we are well-versed in storing and cataloging items, so it seemed like a good fit for us to help with the recovery of our community.”

Several tornadoes across the state, including the one in Jefferson City, occurred on the anniversary of the disastrous Joplin tornado on May 22, 2011, that killed 161 people and destroyed one-third of the city. In the eight years since that tragic event, more than 32,000 documents and photographs scattered by the tornado have been recovered by the National Disaster Photo Rescue organization. Roughly 18,000 of these photos and special documents were reunited with their owners after being found as far as 75 miles from ground zero. The all-volunteer organization, which meets online and at First Baptist Church in Carthage, has expanded its mission to include weather disasters in Van and Garland, Texas; Washington, Illinois; Conway, Arkansas; and Moore, Oklahoma. “We thought it would last six months back in 2011, but we continue to get calls to help survivors locate their valuable photos and other meaningful documents, including old military records and birth certificates,” said Thad Beeler, the organization’s executive director. “We are seeing the world at large—family by family. We are a community with a story, so losing our photos and records, we lose part of who we are. Reuniting these keepsakes is a raw emotion for all of us.”

For more information on the National Disaster Photo Rescue project, visit nationaldisasterphotorescue.org. Also, you can learn more about the seventh deadliest tornado in US history through SHSMO’s Oral History collections. The Joplin Tornado Oral History Project includes interviews with people who experienced and/or were affected by the 2011 tornado.