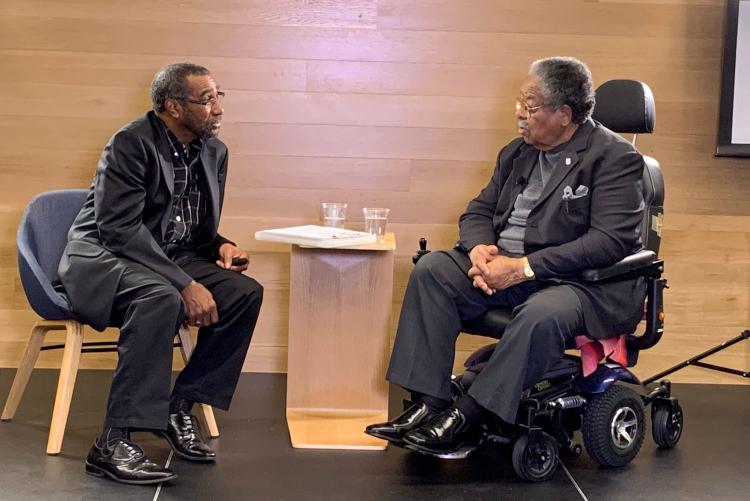 An audience of more than 200 people attended the African-American Experience in Missouri lecture featuring Sehon Williams (right) and Bill Thompson (left) on October 15.

Ninety-seven-year-old Sehon Williams remembers when his hometown of Columbia, Missouri, had segregated schools and businesses, and the hospitals were off-limits to African Americans. For many years the town had a vibrant black community—Sharp End—but desegregation and urban renewal efforts ironically led to its decline. In October, Williams shared personal stories about Columbia’s past in a public conversation with longtime Columbia civic leader Bill Thompson as part of the African-American Experience in Missouri Lecture Series.

Williams said that in some ways, the segregated community where he grew up during the 1920s and 1930s was a good place to be. “It was safe, and everybody looked out for each other,” he said. “But you stayed in your area, and black people didn’t cross Broadway unless they were going to work.”

When Williams was drafted during World War II, he was married with a young child at home and another on the way. He was sent to Italy as a member of the 92nd Infantry, a segregated US Army division known as the Buffalo Soldiers. Williams said that one of his happiest moments was coming back to a new home that his wife purchased from the paychecks he sent from Europe.

“Most soldiers had to come home and restart their lives, find work and a place to live, but my wife surprised me by buying a home while I was away. That was unusual for any soldier,” said Williams, who soon went to work for the US Postal Service. There he rose to management positions, retiring after a 33-year career.

“Yes, I fought prejudice in the workplace, but my community kept us grounded,” Williams said. “We had camaraderie in the black neighborhoods that has been lost.” Urban renewal programs begun in the 1960s soon destroyed nearly all of the black-owned businesses in Sharp End, he added. A substantial part of the black commercial district was demolished to make way for public housing.

“The worst part is that the footprint of public housing didn’t even use 20 percent of its designated area,” said Thompson. “It really broke the economy of the area and made it difficult for blacks to gain their own economic stability.”

In September, Charles Nilon, professor of Urban Wildlife Management at the MU School of Natural Resources, delivered the first African-American Experience in Missouri lecture since the opening of the Center for Missouri Studies building. Nilon’s talk focused on green spaces and urban ecology in north St. Louis’s African American community.

“When we began our research, we were told by its residents that the north part of the city is the most misunderstood, stereotyped, and neglected part of St. Louis,” said Nilon. “There was a distrust of conservation efforts; that their own views on how to manage vacant lots and abandoned buildings would not be taken into consideration.”

Nilon said that research he and graduate students have conducted in north St. Louis has uncovered unique bird species and other wildlife in open spaces. Some of those spaces are the unplanned results of activities such as removing abandoned buildings. Planned green spaces can lead to unintended consequences such as raising property values beyond what neighborhood residents can afford. “We are learning how MU researchers can serve their needs and how ecology can be a benefit in these open spaces in north St. Louis,” said Nilon.