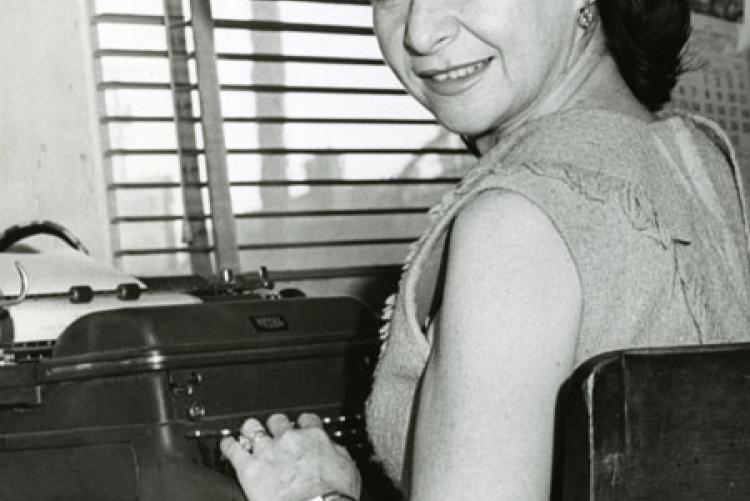 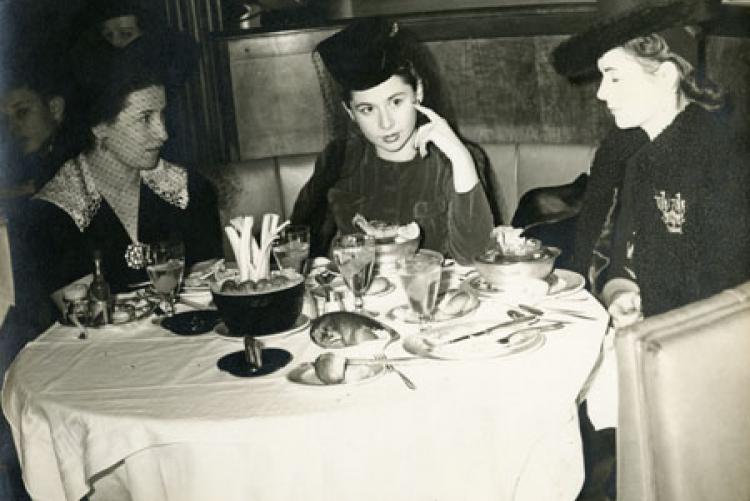 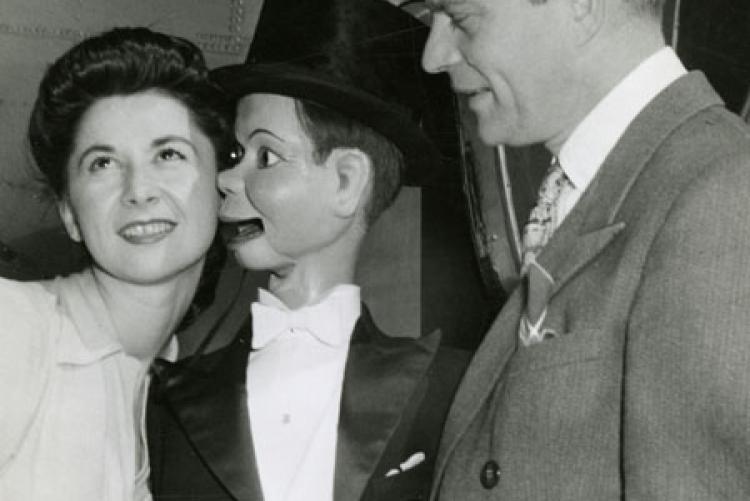 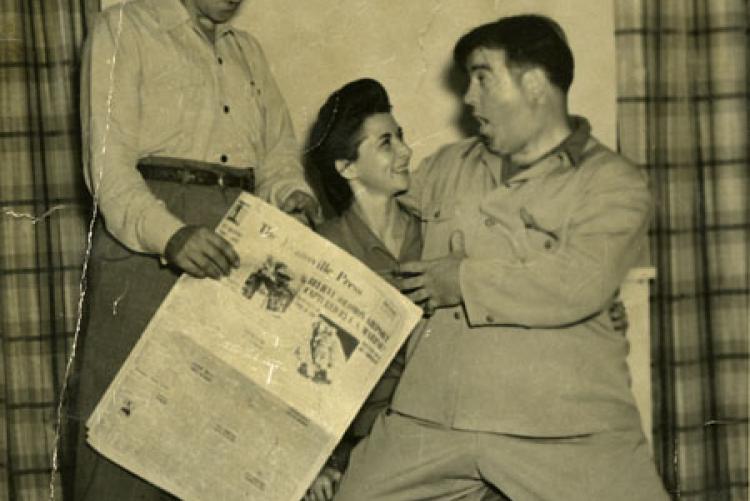 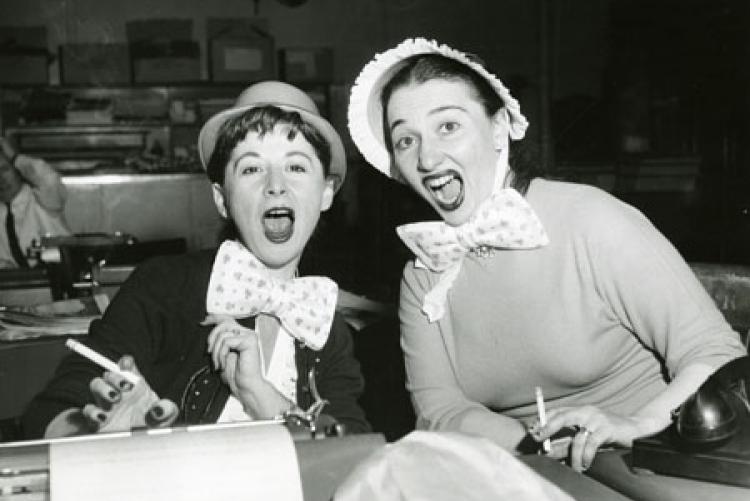 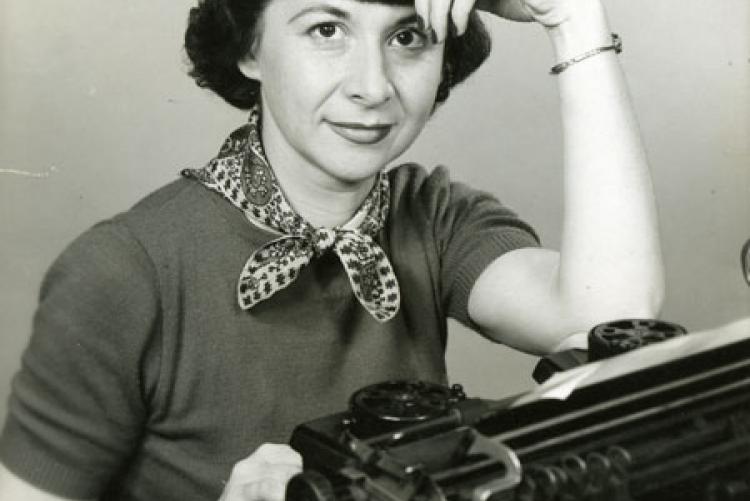 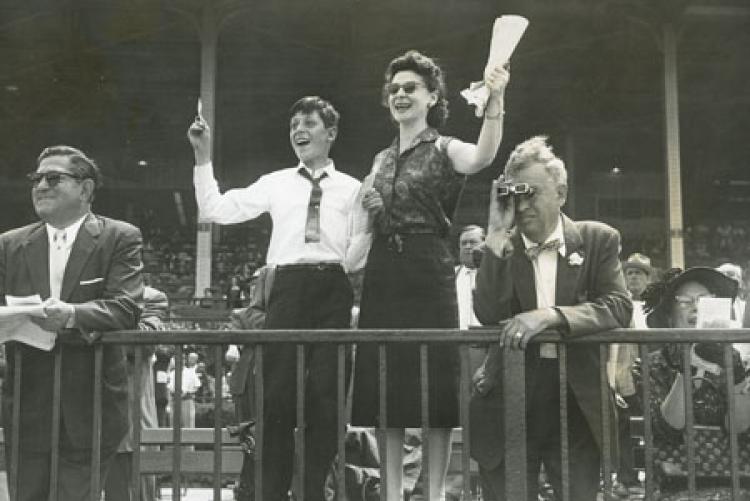 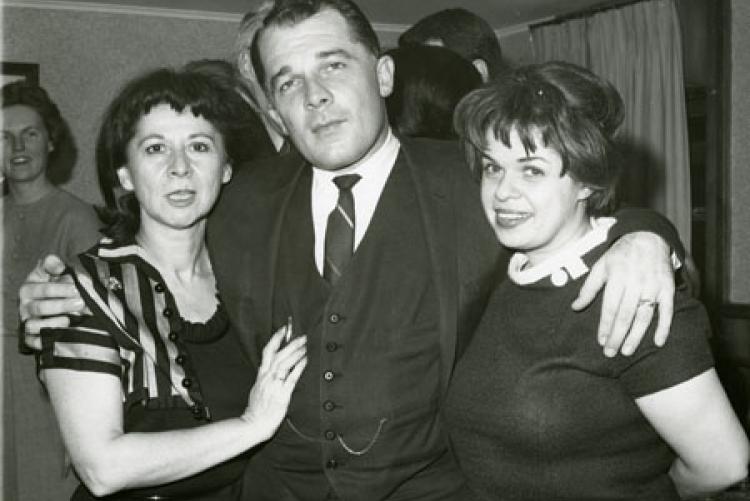 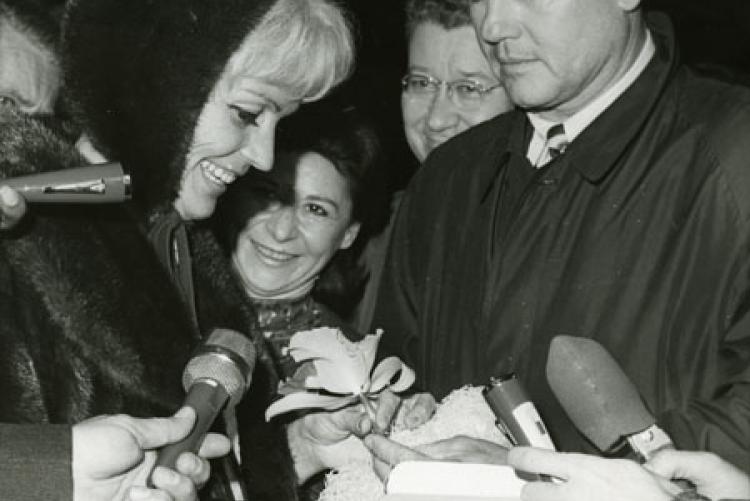 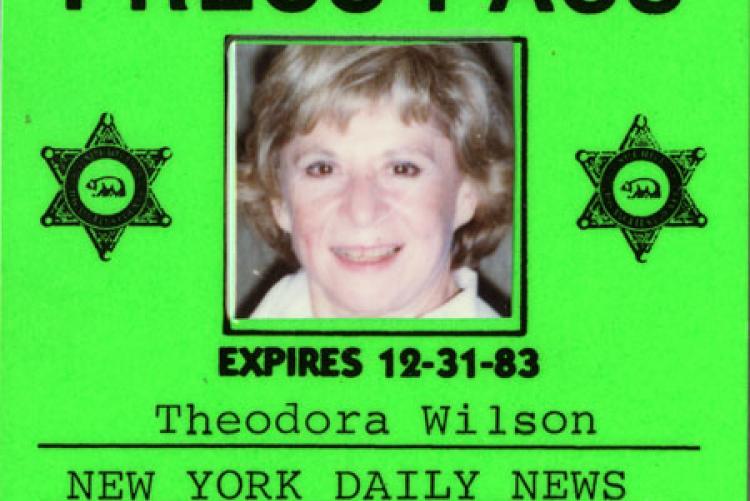 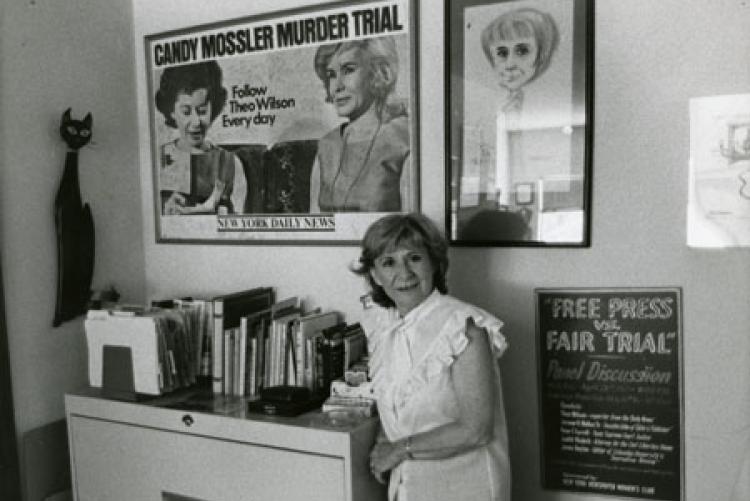 In recent years the newspaper industry has suffered setbacks as papers struggle with a precipitous decline in circulation, fewer ad sales, and fierce competition from online media. The career of Theodora Nadelstein Wilson, known to readers of the New York Daily News as Theo Wilson and hailed as “dean of the trial reporters,” illustrates the golden age of newspaper journalism and its subsequent decline.

Theodora, the youngest of the eleven children of Adolph and Rebecca Nadelstein, was born in Brooklyn, New York, on May 22, 1917. Her father was the founder of Nadelstein Press. She was first published at age eight in a national magazine for her story on the family's pet monkey, Mickey. Subsequent poems, short stories, plays, and articles by her were published and produced at Girls High School in Brooklyn, which she attended from 1930 to 1934.

After graduation she enrolled at the University of Kentucky, where she became a columnist and associate editor of the school newspaper, the Kentucky Kernel, despite never taking any journalism courses. She graduated Phi Beta Kappa in 1937 at age nineteen and immediately went to work at the Evansville Press in Indiana.

At the Press she was quickly promoted to tri-state editor, writing and handling copy from Indiana, Kentucky, and Illinois. In 1943 she worked briefly at the Indianapolis Times before moving to the Richmond News Leader in Virginia with her new husband, William Robert “Bob” Wilson. There she became a court reporter, covering the city, state, and federal courts as well as federal agencies such as the FBI, the Alcohol Tax Unit (now the Bureau of Alcohol, Tobacco, and Firearms) and the U.S. Marshals. She found stories “that were irresistible, because they were about people. Heroic, corrupt, honest, greedy people.” Wilson also learned invaluable skills that were useful later in her career as a reporter.

During her time on the court beat, Wilson “learned to read a long and complicated opinion and dictate immediately from it, how to write meticulous notes for hours every day in every kind of a court case, how to write a story, always on deadline, so it could be understood by readers.” She wryly recalled, “The judges in Richmond read my reports every day; believe me, I heard about it if I goofed on the tiniest detail.” In 1946 Theo and her husband celebrated the birth of their only child, Delph R. Wilson. Being a new mother did not slow Theo Wilson down.

When Bob was offered a job at NBC Radio in 1951, they moved to New York, where Wilson spent a brief period at the New York Post before joining the New York Daily News in 1952. In 1960, the couple divorced. Wilson remained in New York and became one of the most celebrated and respected trial reporters in the history of journalism.

At the time Wilson joined the New York Daily News, it had the highest circulation of any American newspaper. She later reminisced, “The News was considered one of the most professionally edited and written newspapers in the country; and the high morale of the city room where we worked was the envy of reporters and writers of other papers where cliques and office politics were a way of life unknown to us at the News.”

Beginning in 1954 with the infamous Sam Sheppard murder trial, Wilson covered every major trial in the United States for the Daily News. Over the next few decades, Wilson traveled across the country to report on the trials of Jack Ruby, Sirhan Sirhan, Charles Manson, Claus von Bulow, Albert DeSalvo, David Berkowitz, and other infamous personalities. She also wrote about the Mercury and Apollo space programs, Jacqueline Kennedy’s 1962 trip to India and Pakistan, the 1968 Democratic National Convention, and Florrie Fischer, a rehabilitated drug addict. But it was trial reporting that won Theo fame as an accomplished journalist.

In her memoir Headline Justice, Wilson said, “I have always compared big courtroom trials to great theater, filled as those trials are with revelations of human weakness and folly, with violence and sorrow and humor and pity and passion, all the more fascinating because these are real people, real life.” She described the challenges of covering trials, “We had to rely solely on handwritten notes; we were not allowed to bring tape recorders inside a trial courtroom. We dictated and wrote from those notes; there were no ‘handouts’ available, no live feed from the trial room, no time to wait for transcripts, if indeed any transcripts were available.”

Longtime friend and fellow journalist Linda Deutsch recounted Wilson’s rules for covering a trial: “Never leave the courtroom except to file your story; you might miss a crucial moment. Don’t give undue attention to out-of-court gossip; the only important facts are those which come from the witness stand to the jury’s ears. Never forget that lawyers on both sides of a case are salespeople, and those ‘secrets’ they may want to tell you are designed to help their clients. And most importantly, never come to a trial with your mind made up; listen to the evidence as if you were a juror and report it with a fair, unbiased approach.”

Defender of the Free Press

Wilson became an outspoken champion of the free press after the US Supreme Court held in Sheppard v. Maxwell that accused murderer Sam Sheppard had not received a fair trial due to prejudicial media coverage. After the court’s decision, she tenaciously defended the rights of the press in “free press vs. fair trial” debates with members of the legal community. Notably, Wilson was the only out-of-town reporter allowed to attend the second Sheppard trial after she stood in line with the public every morning until the trial judge finally relented and permitted her in the courtroom.

In 1973 the Daily News decided to establish a bureau in Los Angeles with Wilson as the primary correspondent. She moved to Hollywood Heights permanently and from there covered such major trials as the Pentagon Papers, Angela Davis, and Patty Hearst. She also covered the 1973 wedding of Princess Anne, Richard Nixon's health crisis in 1974, the Hillside Strangler, celebrity deaths and arrests, and film and television awards ceremonies. Wilson gained fame in 1976 for taking a $200 cab ride from Los Angeles to Chowchilla, California, 200 miles away, so she could be the first reporter on the scene of the kidnapping of a busload of schoolchildren.

End of an Era

By the late 1970s, it was clear to Wilson that the Daily News was changing, and in her opinion, it was changing for the worse. Longtime editor Robert Shand had passed away in 1966, and veteran city editor Harry Nichols was forced out by the paper’s new management in 1969. In 1982, after covering the first Claus von Bulow trial, she accepted a buyout from the Daily News. In her memoir Wilson declared, “The most wonderful thing about starting out in the newspaper business when I did and where I did was that I was thrust into a world of fiercely independent, creative, well-read, vastly underpaid and overworked people who loved the newspaper business so much, cared about writing so passionately, that they stayed in a job distinguished by low wages and long hours.” Over the years the newspaper industry had changed, and Wilson recognized that the golden age of newspaper journalism was coming to a close.

She wistfully remembered, “I was lucky for a long time. The Daily News was considered the best trial paper in the country, and the editors I worked with always knew how to handle a trial.” Wilson noted that part of her success came from working with editors “who understood news, and they understood the millions of readers. They had style, they had humor, they had grace under pressure. They were professionals.”

Throughout her career, Wilson moonlighted for such magazines and tabloids as True Life Stories and the National Enquirer. She developed a close and long-lasting relationship with H. D. “Doc” Quigg, a UPI senior editor and Boonville, Missouri, native. After her retirement she did freelance work on the John DeLorean and O. J. Simpson trials for various newspapers and cable television shows. During the Simpson trial, Wilson found herself dismayed by the “ʻflash and the trash’ surrounding the case—the hype, the manipulation of unseasoned media, the bias shown by commentators even before they heard from the courtroom, the publication of rumors and gossip and leaks that violated every principle of trial reporting.”

In 1996 Wilson completed her memoirs, Headline Justice. She died suddenly on January 17, 1997, while preparing to begin her book tour. By the time Wilson passed away, two of the papers she formerly worked at, the Richmond News Leader and the Philadelphia Bulletin, had folded. The New York Daily News nearly suffered the same fate. Before her death Wilson sadly noted, “Newspapers are an endangered species, and the kind I worked on are extinct.”

Over the years Wilson was nominated for the Pulitzer Prize for her reporting, including for stories on welfare abuse and Hurricane Carla. She won numerous awards, including three Front Page Awards, two Page One Awards, the Society of the Silurians Award in 1966, the Matrix Award from Women in Communications (formerly Theta Sigma Phi) in 1970, and the University of Missouri Honor Medal for Distinguished Service in Journalism in 1984.

Friend and fellow journalist Linda Deutsch said of Wilson, “In courtrooms across the country, she charted the emotional landscape of America and took readers along for a tour they would never forget. You may ask what was so different about Theo’s coverage. The answer is that many journalists have covered such stories; Theo inhabited them.” Wilson truly was the “dean of trial reporters.”

The Theodora R. Wilson Papers consist of newspaper articles, trial notes, awards, correspondence, photographs, and miscellaneous items from her career as a reporter and writer from 1937 until 1996. The papers are arranged into four series: personal, professional, articles and supporting materials, and miscellaneous articles.

Wilson's status as the premier trial reporter of her generation is thoroughly documented in the collection. Her work provides firsthand accounts of many of the major events of this period in America. Wilson’s papers also illustrate the changing relationship between mass media and the justice system over the second half of the twentieth century. Researchers will find her trial notes, articles, photographs, and correspondence, as well as courtroom sketches by Daily News artist Joe Papin, in the collection. Those interested in famous criminal and celebrity trials such as Sam Sheppard, Candace Mossler, Dr. Carl Coppolino, the Manson Family, Sirhan Sirhan, Angela Davis, the Pentagon Papers, Patty Hearst, David Berkowitz, the Hillside Strangler, and others will find a wealth of information. Articles about the space program, celebrities, the 1964 and 1968 political conventions, the Jonestown Massacre, Vietnam refugees and POWs, and welfare corruption are also represented in the collection.

During Wilson’s career at the Daily News, the paper went into gradual decline. Those interested in the history of the Daily News and print journalism will find Wilson’s correspondence from the 1970s and 1980s that details the disputes she had with new management over what she considered the “butchery” of the copy she submitted from California to be of special interest. The veteran editors’ replies to Wilson describe the turmoil at the Daily News during this period not only because of the internal conflicts but also because the paper was experiencing low circulation and financial difficulties, and rumors abounded as to what its fate would be. Wilson left the Daily News in 1982. The paper is still published today.