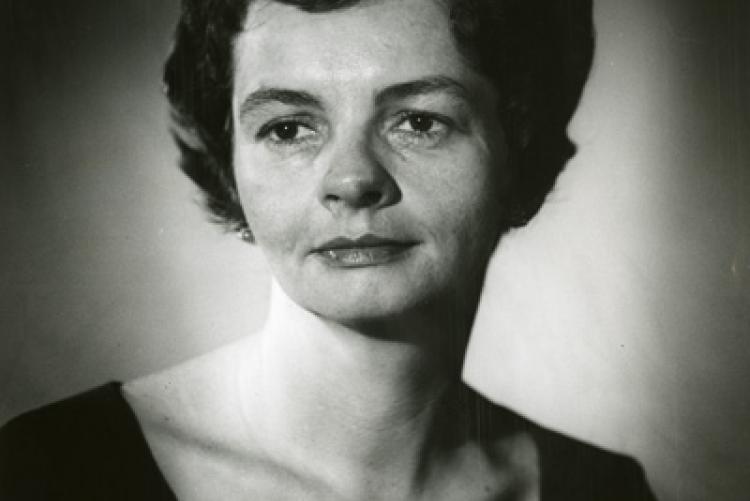 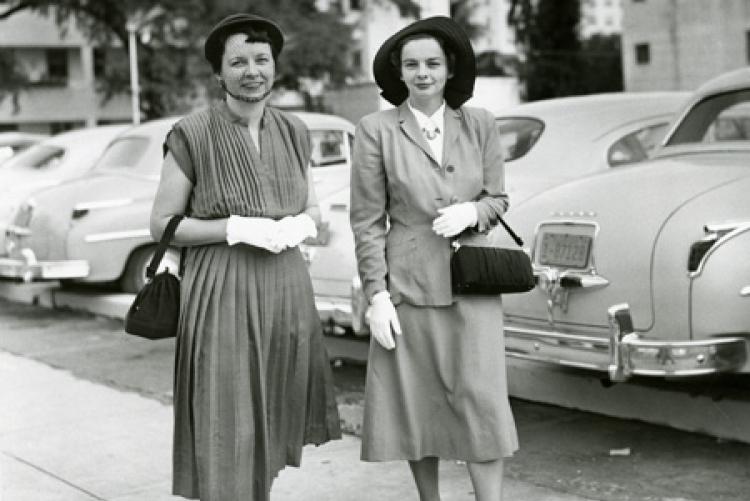 As the first female reporter to work the Michigan state capitol beat, Roberta Applegate developed a reputation as a journalist who earned the respect of her male coworkers during a time when female reporters were still a novelty. “Bobbie’s no sissie,” her editor, G. Milton Kelly, boasted, “She conducts herself well, knows news and how to get it, and how to keep out of other people’s hair. Let’s praise a newspaper woman who doesn’t try to be a newspaper man.” As one of the first female reporters in Michigan, Applegate made successful strides in breaking down gender stereotypes in the male-dominated field of journalism but made her most lasting contributions as a devoted and tough journalism professor at Kansas State University.

Roberta Applegate was born on June 5, 1919, in Buhl, Idaho, to Albert A. and Grace (Robinson) Applegate. Her father was a reporter, editor, and journalism professor. When she was six years old, Applegate’s father began taking her to work at the Idaho Statesman. “I just kind of knew that’s what I would like to do,” she later told a reporter, “My dad was extremely supportive of women who were highly ambitious.” Applegate served as editor of her high school newspaper and accompanied her father’s journalism classes on field trips.

Because her father was head of the Michigan State University School of Journalism, Applegate chose to study German and French instead of journalism. She later recalled, “Through high school and college I was undecided about a career, because after all, there weren’t many women reporters, and most of them were either sob-sisters or society editors. I know now that both are important to newspapers, but then my nose turned up high at the very mention of them.”

Still, she could not avoid the call of the newsroom. Applegate joined the staff of the campus newspaper, the Michigan State News, and worked as a reporter, feature writer, music critic, and women’s editor. In 1940 she graduated with a BA in French and German from Michigan State University. The day after graduation Applegate reported for work as a feature writer at the Lansing State Journal.

She worked at the Journal for a year and then attended Northwestern University on a scholarship, where she graduated with an MS in journalism in 1942. Applegate was then hired as women’s club editor by the Detroit Free Press. After eight months at the Press, Applegate accepted a “durational appointment” with the Associated Press (AP) in Detroit. She was only the second woman to work at the AP’s Detroit office. Due to the number of men serving in the military during World War Two, Applegate and other female reporters were able to obtain journalism jobs otherwise unavailable to them.

Applegate found that not everyone welcomed her in the newsroom, but she acknowledged, “I was very lucky. I had some pretty good friends among the men, who saw that I had fair play.” According to Applegate, her editor, G. Milton Kelly, was “this feisty little Irishman. He’d have beaten up anyone who would have tried to discriminate against me.” Her talent as a reporter did not go unnoticed. AP Bureau Chief Ted Smits wrote Applegate’s father, “You will be glad to know Bobbie has gotten off to a flying start with the AP. She has made a splendid impression all around and her writing ability is even higher than I expected it to be—and I had high expectations of her.”

“She Gets Her Facts Straight”

She later transferred to the capitol pressroom in Lansing, Michigan, where she was the first woman to cover the state legislature, state offices, and the Michigan Supreme Court. Applegate found a much more welcoming atmosphere at the capitol. “I always had great cooperation and felt like a part of the group,” Applegate remembered years later, though former governor Murray Van Wagoner found her presence disconcerting. Van Wagoner often muttered “hell, damn,” while playing pitch with reporters in the newsroom. The former governor would then remember that Applegate was present and apologize. One day, after cursing under his breath, he turned around in his chair, looked at Applegate, and declared, “Well, damn it, after all, this is the pressroom.” She later remarked, “I didn’t tell him I’d heard far worse from another presswoman.”

Despite the prevailing sexist attitudes of the time, her male colleagues recognized Applegate’s abilities as a journalist. Kelly reported to Smits that she "is as trusted and accepted as any male reporter—more so than some of them because she has proved she gets her facts straight on the first try, isn’t fooled by the fakes any capitol reporter runs into many times a day, and she isn’t ‘fresh.’” He concluded his report, “In my judgment, Miss Applegate will have a good career in newspaper work."

Too Young and Educated

Although she proved herself a capable reporter, Applegate was stymied by the glass ceiling when she applied for a prestigious Nieman Foundation fellowship in 1946. Informed she was one of thirty finalists competing for twelve fellowships, she wrote Ted Smits, “I came away not completely hopeless, but on the other hand not too hopeful. I got the distinct impression that I was handicapped by two things: I am too young and have too much education!” A few days later she received a letter informing her that she had not been selected. Nieman Foundation curator Louis Lyons told her, “We felt an obligation to give some edge of preference to veterans and war correspondents, especially those who had been wounded or prisoners, because we felt they had some claim to such a year as a process of readjustment.” Unbeknownst to her, another career opportunity for Applegate loomed on the horizon.

In 1945, while reporting on a graft trial, Applegate caught the attention of Kim Sigler, the special grand jury prosecutor. In 1947, after he was elected governor of Michigan, Sigler asked Applegate to be his press secretary without asking her political affiliation. His only criteria for the job were “honesty, ability and loyalty.” It was only years later that Applegate learned she was “in line to head the Lansing bureau had she remained with the AP.”

As the first woman to serve as press secretary to the governor of Michigan, Applegate’s duties included gathering material for Sigler’s speeches, writing press releases, tracking state political trends, gauging public opinion, answering questions from the press, and arranging press conferences. She confessed that most people believed “I am something of a glorified court reporter—which is amusing because I don’t know a jot of shorthand.”

The Golden Age of Women's Pages

When Governor Sigler was not reelected, Applegate reentered the field of journalism. In 1950 she was hired as the women’s club editor at the Miami Herald, where she joined a talented staff that included women’s editor Dorothy Jurney, assistant women’s editor Marie Anderson, and copy editor Marjorie Paxson. All three women played a significant role in the transformation of women’s pages from club news and engagement announcements to insightful, informative articles for women.

Within a short period, Applegate became a feature writer. She interviewed a variety of celebrities and politicians, including Judy Garland, Madame Chaing Kai-shek, and Richard Nixon. Applegate later said her interview with Garland was one of the more difficult stories of her career. The entertainer responded to questions in “vague monosyllables,” which led Applegate to write her story “without any adjectives or adverbs.” “That was a challenge,” she said, adding, “I received a lot of hate mail for that story.”

Applegate wrote well-received stories about mentally ill children, Florida’s nursing shortage during the 1950s, children with special needs, and widows. In 1962 she wrote a series on Miami’s African American community and received an overwhelming favorable response from readers. One white businesswoman said it was “the most forward looking and helpful series” she had read. Another white reader wrote Applegate to tell her she “was glad we were doing the stories because more people should know about Negroes like that.” Applegate later declared, “I think [the story] helped break down some stereotypes.” Such stories led to her winning multiple Florida Women’s Press Association Club awards.

In 1964 Applegate was appointed associate professor of technical journalism at Kansas State University. In a letter to her former AP editor, G. Milton Kelly, she explained the reasons behind her career move: morale at the Herald was declining, there was “increasing impersonalization” at the paper, she had never “been sold on the Florida climate, and Miami is growing so fast I’m beginning to get claustrophobia.”

Although Applegate lacked formal teaching experience, she proved to be a natural in the classroom, teaching courses on reporting, magazine writing, and media law. She mentored a new generation of journalists who never forgot her role in their success. One former student wrote years later to tell Applegate, “Even though I was a Broadcast major back in the 60’s and early 70’s, I believe I learned the most about journalism and writing from that one Reporting course you taught.” Another student acknowledged, “I don’t know if I would have made it through J-school if it hadn’t been for Roberta Applegate.” In 1974 Applegate was promoted to associate professor of journalism and mass communications.

Applegate was also actively involved in national, state, and local media organizations. She organized a chapter of Theta Sigma Phi (now Association for Women in Communications) at Kansas State University, served as the organization’s vice president from 1970 to 1972, was named president of the Kansas Press Women for 1975-76, and served as chair of the magazine division for the Association for Education in Journalism and Mass Communications. In 1976 she was honored with the Distinguished Alumni Award from Michigan State University. Three years later, Applegate received the Matrix Honor Award for Distinguished Journalistic Achievement. In 1985 she was named Kansas Press Woman of the Year. Roberta Applegate retired from teaching in 1988. She died from cancer on June 24, 1990, in Manhattan, Kansas.

The Roberta G. Applegate Papers consist of articles, awards, correspondence, miscellaneous material, newspaper clippings, pamphlets, photographs, and speeches. Most of these papers were written by Applegate, except the correspondence in the first four series and the newspaper articles written when she was press secretary to the Michigan governor.