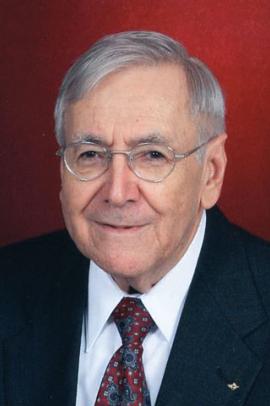 James R. Reinhard retired in 1997 after twenty years on the bench of the Eastern District, Missouri Court of Appeals. He served as chief judge during 1984-85. Prior to his appointment to the Court of Appeals, he was a practicing attorney in Milan and Paris, prosecuting attorney of Sullivan County and Monroe County, and judge of the Tenth Judicial Circuit Court. He is a resident of Hannibal. Reinhard has been active as a board member and officer of educational institutions and bar associations, including Truman State University, the Kirksville College of Osteopathic Medicine, the Missouri Bar, and the Tenth Judicial Circuit Bar. He has served on the Society’s board of trustees since 1998 and transferred to emeritus status in 2018.